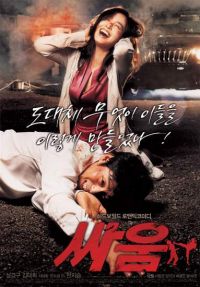 This is mostly how Ji-na and Sang-min spend their time together. But they decide to overcome their clashing characters and vow for forever love.However, their vow is short-lived and their life of "happily ever-after" seems to be an unattainable fairy tale. Sang-min is the nations number one indifferent husband. Although unintended, he always seems to aggravate Ji-na. Ji-na is his wife. After putting up with Sang-min's distasteful attitude, she has become a scrawny, tense, and violent wife. While their grudges against one another are still left unhandled, they decide to split up. They clash on every issue and a psychological warfare begins. What began as verbal fights lead on to physical fight and they fight as if they are going to kill each other. Theres no room for patience and understanding to these two ex-lovers. They enter a merciless face-off. A fight leads on to another then another and the cycle continues.

View all 38 pictures for "Venus and Mars"