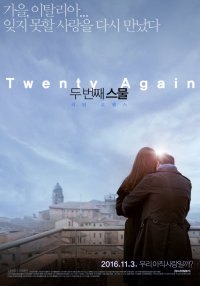 "Twenty Again - Movie" is a co-production between Korea and Italy
Formerly known as "Second Twenty"
Synopsis
Director Min-gu goes to Turin, Italy as a jury member for a film festival. He runs into his ex-girlfriend Min-ha by chance on the plane and greets her cheerily. She, however, treats him like a total stranger. She pretends she has never known her boyfriend of 13 years, but after spending time with her stepdaughter in Italy, she goes back to Turin to meet him. Confirming their love for each other-now a 48-year-old man and a 40-year-old woman-they look at Caravaggio paintings and travel to Tuscany together. When talking about the past, they realize why their love couldnt work and confirm that they each have their own lives and families, so they promise not to contact each other again when back in Seoul. "Twenty Again - Movie" is a delightful love story of people in their forties, with cheerful performances by leads Kim Seung-woo and Lee Tae-ran in a new film from Park Heung-shik, whose previous "The Railroad" won the Best Actor Award at the Torino Film Festival in 2007. (NAM Dong-chul)