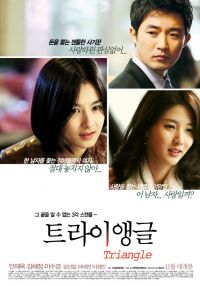 "Triangle" is a co-production between South Korea and Japan
Sang-woo (Ahn Jae-wook), a charming con artist, approaches a wealthy and attractive widow in order to secure a 2 billion-won artwork in her possession. But a strange woman, Seong-hae (Kang Hye-jeong), keeps getting in his way and blackmails him to let her in on the con project.