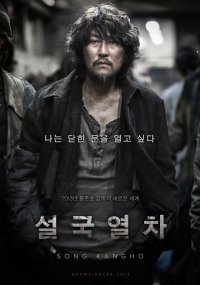 "Snowpiercer" is a South Korean, French and American co-production.
Synopsis
All is not so serene on the train after all. The tail section of the train swarms with the poor and the starving. The golden front is where the few remaining members of the establishment live luxurious lives replete with wine and steak. After 17 years of suffering, tail section leaders Curtis and Gilliam have secretly begun planning a revolution. Now the time has come for the people of the tail section to rise up against the soldiers violent rifles. Young revolutionary Curtis advances with one goal in mind: to meet Wilford, the creator of the train and keeper of its perpetual engine.

View all 137 pictures for "Snowpiercer"