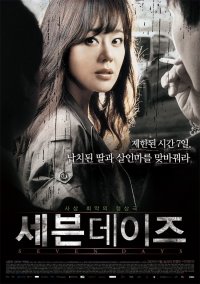 Synopsis
Ji-yeon is a successful lawyer and single mother to a seven-year-old girl. On her daughters field day, Ji-yeon competes with other parents in a running race and almost comes in the first place. However, nowhere could she find the girl whos been watching and rooting for her mother to win. Later that day, Ji-yeons receives a phone call from an anonymous man, who tells her he has her daughter in custody and proposes a deal. To see her daughter alive, Ji-yeon needs to prove a convicted murderer not guilty on his second trial, only within a week. Ji-yeon tries to convince herself the murderer should be innocent, but the encounter with the victims mother makes her understand what drove crime-to-crime.

View all 64 pictures for "Seven Days"