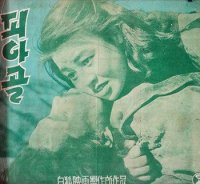 Synopsis
After the armistice a military unit led by a person nicknamed "Agari" (Le Ye-chun) commits all the wrong-doings in Jiri Mountain. Cheol-soo (Kim Jin-kyu), who sick and tired of communism, is loved by cold-minded Ae-ran (No Gyeong-hui), who is committed to her party. One day So-joo, a female agent who was relocated to another camp, comes to Piagol with her shoulder wounded. Man-soo (Heo Jang-kang) rapes her and she dies while being raped. Man-soo kills his communist peer to hide his sin, and makes Dal-seok responsible for all his wrong-doings, He later also kills Dal-seok. All the communist troupes are about to be killed due to a government crackdown. Ae-ran and Cheol-soo abhor living in the mountain and plan to free themselves from being communists, but their conversation is overheard by Agari. Agari kills Cheol-soo during a quarrel. Ae-ran at last kills Agari, and descends the mountain alone.

View all 9 pictures for "Piagol"