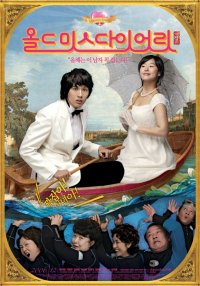 Synopsis
CHOI Mi-ja, despite being thirty-two years old, is the leader hands down in being rash and naïve. Tired of her mistake filled life and increasing wrinkles, something happens in Mi-jas life to end her downward spiral. She meets tall, young, good-looking but rude Producer JI at the TV station where she works as a dubbing artist and falls head over heels for him! Mi-jas family finds out and grows in hope to bring Producer JI into the house somehow. But Mi-jas rash, naïve behavior is a big problem and her family is also far from normal. The three grannies, widowed father, old bachelor uncle, all short in size and odd in character, there is nothing that can stop them. As the entire family gets into full swing in trying to help Mi-ja get the younger man, the very unique familys hilarious events begin. Their unpredictable rash challenge, will they be able to succeed?