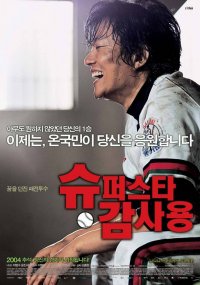 Synopsis
In 20 years' history of Korean professional baseball, there are 758 retired pitchers. Only 126 of them recorded more than 10 victories, and 431 who won more than once. The remaining 327 left the baseball field without even one victory." Dreams will come true! Superstar Gam Sa-yong 170 cm tall and weighs 70 kgs. He has small hands and is left-handed. This film is story about a man who was not meant to become a baseball player. In 1982 when professional baseball first started in Korea, Gam Sa-yong makes the team just because there is no left-handed pitcher. Unlike the team's name "Sammi Superstars" the team has no star at all, and is marked as the worst team in the game. Sa-yong is never selected as starting pitcher, but always the relief pitcher for losing games. When the team seems to be losing, Sa-yong is always called to the mound. Naturally, the opposing team cheered when Sa-yong came unto the ground. One day, Sa-yong has an opportunity of a lifetime. Park Cheol-sun of the OB Bears, the strongest team, was looking to win his 20th game. The pitchers at Sammi refuse to play, knowing he will lose for sure. At last Sa-yong gets the chance as starting pitcher. It was Sa-yong's first and only chance to be the starting pitcher and win, just once. Will his dream come true?