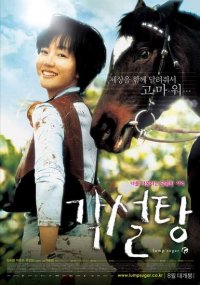 The daughter of a poor rancher, Si-euns only hope is to one day, become a jockey. With her mother passing away at her birth, her favorite horse, Chun-doong, has become not only her friend, but also a soul mate. She is devastated when Chun-doong is sold to another owner, but when they are reunited two years later they have a chance to create a miracle by teaming up in a race.

View all 30 pictures for "Lump sugar"