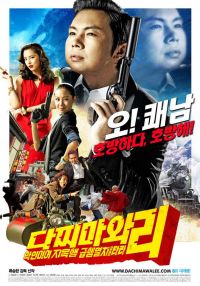 Under Japanese imperialism, Korean national treasure Golden Buddha is stolen. Legendary Korean spy Lee is assigned to recover the fabled statue and reveal the dark plot. His recovery operation fails miserably, loosing both the statue and his sexy partner. Lee discovers that the failure was an inside job and fueled by rage of revenge, he must face off with the dangerous shadowy figure behind the plot.

View all 54 pictures for "Dachimawa Lee"