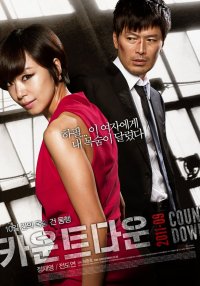 Synopsis
Debt collector Tae Gun-ho, who lost his son five years ago, finds out he has liver cancer. The only way for him to survive is to get a liver transplant in the next 10 days from a woman named Cha Ha-yeon, who apparently has the matching organ. Cha turns out to be a seductive swindler who currently lives in jail, and Tae decides to meet her in person in hopes of saving his own life. Cha agrees to donate part of her liver only if Tae tracks down Cho Myeong-seok, who put her in prison.

View all 94 pictures for "Countdown"