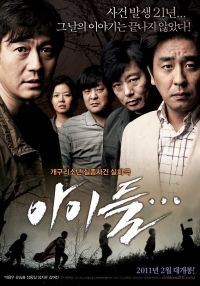 There were high expectations for the movie Children... even before it hit theaters. Although the cast of well-known actors like Park Yong-woo and Seong Dong-il has drawn attention to the film, it is the storys plot that has generated the most interest.

The film is based on a true yet unsolved murder case from the early 1990s that is known among Koreans as the disappearance of the frog children. In 1991, five elementary school students told their parents that they were going to hang out on a nearby mountain to catch frogs. They never came back.

In the movie, a TV producer, the devastated parents of the missing children, a professor and a detective all take different stances on the case and in the end one of the parents becomes a primary suspect. In reality, the case morphed into a national scandal.

Director Lee Kyoo-man, a rising star in the Korean film industry, is expected to present a compelling depiction of the case.

But just as the case hurt the parents in real life, the movie could touch off nerves - especially because the film depicts the parents as primary suspects in the case.

In style, Children... resembles the 2003 hit Memories of the Murder, which was based on another unsolved mystery of a serial killing in Hwaseong, Gyeonggi, in the early 90s.

Audiences familiar with the case may have a difficult time with the plot, which gives the story a fictional ending even though the case remains unsolved to this day.