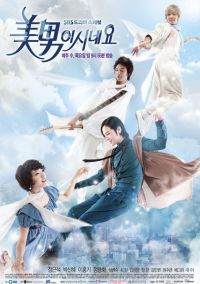 16 episodes - Wed, Thu 22:00
Synopsis
When a nun-in-training masquerades as a boy and enters the (almost) all-male world of a pop idol band, love, fireworks, and much confusion follows. "You're Beautiful" is hilarious fun with a solid grounding in romance and emotional heart, and unfolds with the Hong Sisters' creative trademark flair. The innocent, young Go Mi Nam has never interacted with the "real world"; after she and her identical twin brother are abandoned as children, she grows up in a convent. Today, she is training to become a nun. After her brother successfully auditions to become the newest member of pop group A.N.JELL, all that changes. When her brother suddenly disappears to the U.S. to reverse a botched plastic surgery, his manager desperately decides to enlist Mi Nam to play the part of her brother until he recovers. Mi Nam, unwilling to give up on the dreams of one of them becoming famous and finding their mother, reluctantly agrees. The innocent almost-nun has no idea what she's in for, particularly when it comes to Hwang Tae Kyung, the neurotic, prickly band leader who opposes her joining the band. When the other members, kind Shin Woo and lovable Jeremy, fall under the spell of their newest member, things start to get complicated. And when Mi Nam herself starts to feel strange sensations toward reserved, perfectionistic Tae Kyung, who has his own set of parental issues, chaos ensues. Punctuated by original music and propelled by the pitch-perfect performances of its main leads, "You're Beautiful" is an enjoyable romp from start to finish.

View all 527 pictures for "You're Beautiful"

You're Beautiful | Videos | Suggest a video

You're Beautiful | Links | Suggest a link