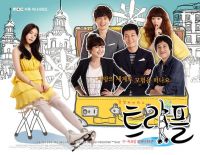 16 episodes - Wed, Thu 22:00
Synopsis
Jumping a triple axel with a handsome troika!
In pursuit of her dreams to become a figure skater,
Ha-ru goes to Seoul where she is reunited with her stepbrother and moves in with him.
But her stepbrother has two other roommates So in a weird arrangement, she lives with three men under one roof. However Shin Hwal makes her heart flutter whenever shes with him

She was separated from her stepbrother Shin Hwal when she was a child, but after arriving in Seoul, she moves in with him. She is surprised to find that her stepbrother has grown into a handsome man, and one day, she confesses her feelings for him; however, he keeps on treating her like a little girl.

Jo Hae-yoon (age: 34, Ad agency creative director) / actor Lee Seon-gyoon
He is a bit old-fashioned but has an emotional side. Personality-wise, he is well-mannered, truly gentlemanlike and very compassionate.

He has his own eye for style and has peculiar tastes, but he knows when to compromise himself. He does have outbursts at times that reveal his macho qualities. When he loses face or is embarrassed by someone, he will never forget the incident and hold a grudge against the perpetrator. He feels inferior to Hwal, who exudes confidence.

Hes a man of action. He quickly sizes up people and figures out their strengths and weaknesses, while also being aware of his own abilities and shortcomings. He is a sour critic and this makes him an unlikable fellow. Presently, he lives separately from his wife. He treats Ha-ru who is 16 years younger than him like a kid, but he finds him falling in love with her to his amazement.

Jang Hyeon-tae (age: 34, Ad agency creative director) / actor Yoon Kye-sang
Appearance-wise, he appears to be simple-minded and clumsy, but he is actually mature and thoughtful.

He has an uncanny intuition and a broad understanding of complex matters. He has a slight but athletic build that makes him look good in any suit or casual clothing. He appears to quickly make himself comfortable in any environment and regarded a social butterfly. But deep inside, he is actually full of inferiority complexes.

View all 251 pictures for "Triple"