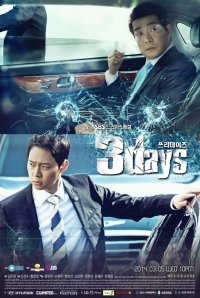 16 episodes - Wed, Thu 22:00
Synopsis
Three shots are fired and the president of South Korea suddenly goes missing from his vacation villa. Three Days is a condensed-time thriller that follows the struggles of elite Blue House bodyguard Han Tae-kyeong (Park Yoo-chun) to find and protect the president. With the aid of local police officer Yoon Bo-won (Park Ha-seon) and fellow Blue House guards, will Han Tae-kyeong be able to save the president before its too late?

View all 187 pictures for "Three Days"