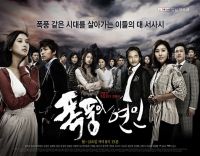 69 episodes - Mon~Fri 20:15
Synopsis
The story of love that conquers all struggles and hardships of life!
All the dramas which were produced by 'Lim Ha-ra' PD become cultural bombs; he is also a famed playboy. But he changes when he met this older girl named, 'Lee Tae-hee'.

Star-girl, Shin Eun-hae | Choi Eun-seo
Eun-hae grew up as the granddaughter of a poor fisherman and has a heart of gold.
Although she limps when she walks, she is a remarkably beautiful girl and has a personality like the shining stars.
Because of her pure, shining personality, the villagers have given her the nickname, Star-girl. Eun-hae falls in love with Lee Hyeong-cheol, but it is a love filled with challenges. Because of her physical disability, she believes that her love for him can never come true.

To be a successful businessman, Hyung-chul believes that one must also experience the bitterness of life.
Therefore, he's learned to fight his way through any obstacle with passion and courage.
As a businessman, he never gives in to those more powerful and fearlessly fights any rivals head-on.
He is an ambitious, attractive soul with fiery passion within.

Yoo Dae-kwon (Father of Yoo Ae-ri) | Jung Bo-suk
By using his power when necessary, he oversees a top company with his charisma.
He has the reputation that he is always willing to make a deal with the devil, if it is for the profit of his company. He is considered a genius business mogul.

Yoo Ae-ri (Daughter of Chairman Yoo Dae-kwon) | Jung Joo-yun
As the daughter of a famous mogul, she has ice-cold business acumen that accompanies her beauty. But one day, her picture-perfect life is tainted when she suddenly falls extremely ill. To make matter worse, she is left with no choice but to receive help from Eun-hae, the other girl in a love triangle between herself and Hyung-chul.

Lee Tae-sub (Mrs. Min's oldest son) | Son Chang-min
He is happily married to wife Suh Yoon-hee. Their marriage is so successful that even those people who shun away from marriage change their minds and attempt to give it a shot. However, even to this mature couple, an unexpected whirlwind finds its way to shatter their powerful bond.

View all 168 pictures for "Hurricane Couple"