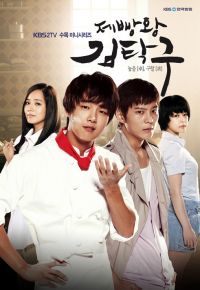 Also known as "Kim Tak-goo, King of Baking"
30 episodes - Wed, Thu 21:55
Story begins 12 years prior to when maid Kim Mee-soon gave a birth to a child named, Tak-gu. As Kim became pregnant with Geo-seung food cooperation chairman, Gu Ill-joongs child, Mr. Gus wife, Suh In-sook forced Kim out of her house. It is after 12 years that Tak-gu appears again at Mr.Gus birthday party to formally announce himself as the legitimate son of Mr. Gu. However, due to Suhs contempt towards him, he is driven out of the house once more. It is at this worst moment in life that Tak-gu meets his everlasting mentor, Pal bong and his true love, Yang Mee -soon. From then on he finally determines to embrace his new life by becoming the worlds best baker. However, his journey to his goal appears to be tough due to unexpected encounters with his first love and his step brother Gu Ma-joon. So how would his journey end?

View all 620 pictures for "Bread, Love and Dreams"