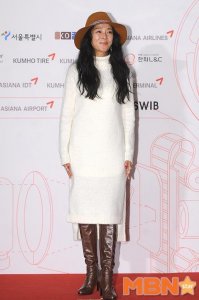 Jo Min-soo first debuted in 1986 on KBS TV Cultural Center, then appeared first on the big screen in Chung: Blue Sketch. She is best known for her TV series roles in Sandglass (1995), Piano (2001), and Will it Snow for Christmas (2009). 2012 proved to be the veteran actresss breakthrough year when she starred in controversial auteurs latest Venice Golden Lion recipient film Pieta (2012).