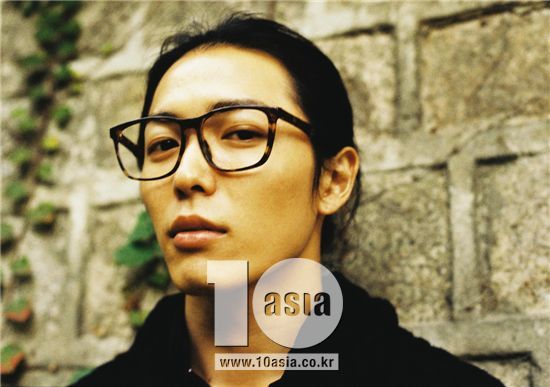 It is hard to forget him once you have seen him. His face, so obscure that it is hard to describe him with words 'good-looking' or 'pretty', is defined yet unfamiliar. This unique man, his sort that we have never seen before and is hard to categorize, is called Kim Jae-wook.

In text, his career may seem like that of the typical 'model-turned-pretty-faced-actor' -- he became known to the public through MBC TV series "Coffee Prince" and played a homosexual in film "Antique". But the appeal of this actor, who seems to be something between a man and woman, a Korean and Japanese, and a rebel and romanticist, can be found in his undefinable individuality and definite ego.

And it is not as well-known as his modeling and acting career but Kim is also a member of trio band Walrus, composed of him and his friends from college. "I grew up in an environment where I naturally got to listen to various types of music because my parents and older brother all liked music. Then I became captivated by the rock genre and like students these days sing and dance along to the music of idol groups, I too came to think that I want to sing and perform. It's actually been nine years since me and my friends got together to make music but we're all lazy so we only got going after forming Walrus. I went on stage for the first time in five years last year and I thought I would go crazy. We had originally planned on releasing a song, in the form of a single or even just the sound source, but I just couldn't do it simultaneously with drama "Bad Man" so we decided to put it off for a bit". Kim, who shows completely different appeals to him when he's walking on the runway versus standing in front of the camera versus on stage, recommended his choice of addictive songs.


1. John Mayer Trio "Try! John Mayer Trio Live In Concert"
"I recently came across this album and I've really been listening to it a lot. John Mayer wasn't really my style of artist when he sang solo. But I recently heard 'Wait Until Tomorrow' by chance and I fell in love with it immediately. I like these sort of lucks. John Mayer at times dances splendidly, and at times seriously, on top of Steve Jordan and Pino Palladino's amazing playing. I think their free performances touche me even more because this is a live album. Both the songs he released after forming the trio and when he was a solo are listed in the album, so thanks to that, I've become so addicted to his performances that I've listened to all his solo albums too now. I would like to recommend a song called 'Try' in particular because it's my favorite these days.

2. Nirvana "In Utero"
"I'm sure every rock kid in My Generation has listened to Nirvana. They're the reason I came to think that I want to do music. I believe that Kurt Cobain, who has now become sort of a symbol, has changed the lives of many people through his accomplishments and energy. And I'm just one of those people. The sound of a noisy yet somehow cool sound of a guitar that flowed out from my brother's room when I was in elementary school sounded greater than anything else in the world. Usually, and just very naturally, 'Nevermind' is considered the album that best represents Nirvana but I feel a stronger attraction to this album's sound that seems as if it lacks sincerity and Kurt Cobain's voice which somehow feels futile. I recommend 'Radio Friendly Unit Shifter'. And whoever gets the opportunity to, should watch Nirvana live. Without question, no such energy exists anywhere in the world".

3. Oasis "(What`s The Story) Morning Glory"
"This is the representative album of a crazy band made by crazy brothers from Manchester. It's an album which I want to call perfect because of their unaffected playing and singing, as well as the lyrics to their songs that speak for the young people of those times. That is how much I like Oasis. I can't listen to their new albums anymore because they've disbanded but, it's okay. I was able to go to both of their concerts in Korea last year. And if you were an Oasis fan, you probably quietly felt that those two would end up splitting. I recommend 'Champagne Supernova' in particular from this album. At the Jisan rock festival last year, I was drunk starting eight hours before they performed performance because I wanted to feel their show with my entire body. And it was the song that was the grand finale of the show. They sang 'I'm the Walrus' too but 'Champagne Supernova' was the highlight for me".

4. Carpenters "Carpenters Gold Greatest Hits"
"During my childhood days, I always woke up to music turned on in the living room. My dad liked music so he put on all sorts of music every morning and the Carpenters was one of them. Their music delivers to me only the warm memories I have -- the smell of winter that tickles my nose as soon as I have woken up, my dad's back turned to me as he tears up pieces of bread and lays them on the windowsill for the birds, or how I rushed to school because I didn't want to be late. It's music that I don't get sick of, no matter how much I listen to it. I didn't know song 'I Won't Last a Day Without You' in the album when I was young. I really like how it's polite and has a clean-cut melody".

5. Lali Puna "Faking The Books"
"This is a band made by a Korean native named Valerie Trebeljahr, adopted into a German family when she was one years old. There is a unique sentimentality about her music which reflects the special environment she was raised in. It's as if it changes the air into one that is warm and dreamy, or like she's writing a short story with a crayon. Anyway, her music is like jewels, hard to describe in words. I recommend 'Faking the Books', the first song from the album". Kim Jae-wook's last choice was four-member electro pop band's 2004 album "Faking the Books". Lali Puna, composed of four friends from Munich in Germany, debuted through "Tridecoder" in 1999. They recently released their fourth album "Our Inventions".

"Kim Jae-wook's Song Picks"
by HanCinema is licensed under a Creative Commons Attribution-Share Alike 3.0 Unported License.
Based on a work from this source