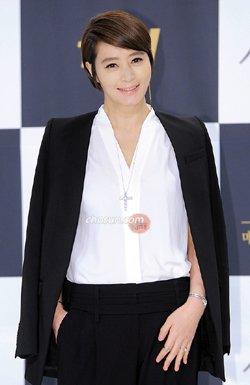 Actress Kim Hye-soo is returning to TV screens with a crime series that is set to start airing on cable channel tvN this week.

It has been about three years since she appeared in the drama "The Queen of Office" on KBS, which drew high viewer ratings with its sympathetic portrayal of the lives of salaried workers.

"I didn't plan to do a TV project, but I read what I thought was a film script, and said to myself: 'I have to do this'," she said at a press event for the series "Signal" in Seoul last week.

Kim plays a veteran detective in the new series.

"I was frightened just reading the script. It was tightly plotted and quite impressive", she said.

"I was also drawn in by the tales of detectives trying to close unsolved crime cases", she added.

"I have done my best to prepare for the series. I think that's all that matters. If the results are good, that would be even better", she said.

"Signal" is a time slip series revolving around two detectives, one in the present and the other from the 1980s. Communicating across time, they team up to investigate long-unsolved crimes.

"Kim Hye-soo Returns to Small Screen with Detective Series"
by HanCinema is licensed under a Creative Commons Attribution-Share Alike 3.0 Unported License.
Based on a work from this source