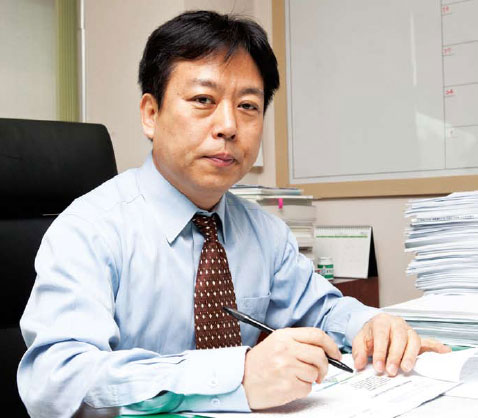 KCT: You have previously been to Cannes as a director, when your film "Sword in the Moon" was invited to 'Un Certain Regard' section. Your shoulders must feel much heavier returning to Cannes this time.

Kim Eui-suk: Going to the Cannes for "Sword in the Moon" in 2003 was my first time at the festival, and this will be my second visit. It's been about 8 years and it is still the best to be at a film festival as a director. Back then Korea cinema was on the rise with "Old Boy" and "Woman is the Future of Man" competing, so I was relatively out of the spotlight. As a director I had nothing to worry about, but since I am going as a different position it feels quite different. In all, I must introduce Korean cinema and make many formal exchanges with the industry people from around the world.

KCT: Your debut film "The Marriage Life" is considered the starting point of modern Korean cinema renaissance. As someone who used to make films yourself, how does it feel to become the chairman of Korean Film Council?

Kim Eui-suk: I was born in 1957, and a new era for Korean films begun when many of us baby boomers entered the movie business. Many of them were active members of college film clubs or even majored in film. As this generation moved into the film circle the atmosphere of Korean cinema began to change and its spectrum became broader. For the next 2 decades, Korean cinema continued to grow and now is the time for a new turning point. For over a month since I took the position I have really been meeting with many filmmakers and listening to what their needs are.

KCT: KOFIC has many tasks to carry out. Which of them are you interested in personally?

Kim Eui-suk: I had worked at KOFIC as vice chairman since last July and as acting chair when former chairman stepped down in November. It feels somewhat strange to do desk job at the Council after being a film director. On the other hand, it also feels different in a sense that this is a challenge for a new field. Of various duties, I am very much interested in expansion of foreign markets. Projects for domestic filmmakers are another field I am paying much attention to.

KCT: When was it that foreign market development caught your full attention?

Kim Eui-suk:  Last year. As vice chairman, I had the opportunity to visit China last September. I also went to filming sites to meet directors like Kang Je-gyu, Kim Yong-hwa and JK Youn. They were all busy shooting their films. And by doing so, my thoughts became clear. We are at a turning point. Number of multiplex cinemas increased for the last 2 decades. Along with them number of audiences rose consistently but now it is stagnant. Average production cost has soared up to US$3.7 million (4 billion KRW) and has fallen. In the end, we came to a state where growth is not possible anymore as the domestic market is limited in its size. Stepping out to the overseas market is not an option, but a mandatory step.

KCT: What made you become more interested in the Chinese market?

Kim Eui-suk: Koreans are excellent in making films and expanding number of theaters, movie viewers and capital is increasing at a fast speed in China. Yet China lacks films and human resources in relative numbers. It is a market in need of contents, actors, directors, writers, and production crew. In other words, they lack human resources who are trained and creative. An event called 'Beijing KO-production' was held last year where Korean and Chinese filmmakers gathered to each present their projects. Surprisingly enough, many of them were very eager to work with Korean films. In addition, many Korean directors and staffs are working in China already. I would want to nurture them in a more aggressive way. To do so each filmmaker has his or her own mission in the private sector but there are also problems to be solved in each country. Thus I believe that more exchange is required. 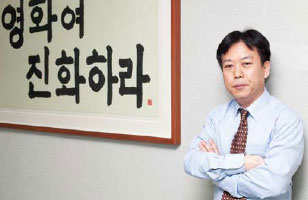 KCT: There are still many restrictions in the Chinese film market. How would you approach them?

Kim Eui-suk: China is one of the countries that still has an official limitation on the number of films imported, but this is expected to be demolished by the WTO. Also talks are happening on a national level with China regarding MOU concerning cooperation on co-production projects, therefore in the future we can seek ways to avoid quota or limits in number of films. There are many ways to do this, such as having China recognize co-production films with Taiwan as their domestic film. That is why we need to try out experiments in many ways. Whether it be investment, production or export of human resources, there is a need to improve various systems to protect copyrights and such by making active exchanges.

KCT: What are your plans with the US or other countries?

Kim Eui-suk: For instance, it seems director JK Youn's way of approaching the US market is different from before. In the past, people tried to enter US market directly based on one's own talent. YOON is considering himself as someone who is starting completely over from scratch, trying to find what the American market wants to work on with a cheap price here and seek ways to re-export it. He has employed American actors to shoot "Temple Stay" in Korea, trying to make it in a "Indiana Jones" meets "Museum is Alive" movie. When American producers hear YOON say he can make a film of such familiar genre with such low budget, they must become interested and show positive reaction. In the US, they too need to raise profit per film with the rising cost of production, and with outstanding production skills, Korean cinema may find a new breakthrough here.

KCT: Production-wise, we can first think of two ways to enter foreign market. You can either directly export human resources, or work together in the format of international co-production.

Kim Eui-suk:  A variety of experiments have been made so far to expand foreign markets. There had been many failures in the process, but despite it all, I believe trying is what's most important. There are many routes to do this; participate in foreign productions as actor or staff, cooperate with the overseas in the form of co-production or investment, or simply directly export film made in Korea. Various attempts are needed at this point of time. In fact the market and the stream of time is changing so fast it is not easy to define which method is better than another. For a while there had been many international co-production projects but many of its shortcomings have been pointed out too. Some analysis assessed it is difficult to carry out commercially successful projects as the market itself is ambiguously extended over two sides. It seems such stage is behind us now. More recently, the trend in international co-production has changed to decide on one location as the main market then proceed.

KCT: What are your thoughts on direct export of Korean cinema?

Kim Eui-suk: For sometime many films were exported to Japan but not so much anymore. Even so consistency will still be important. Apparently numbers have increased in regards to income made by production related human resources such as those working on the scene or CG and post-production directly going overseas, or by bringing foreign projects into Korea. Of course it will be even better if we can export completed films, but I believe manpower export is important too. Korean filmmakers have excellent technical skills and yet have a relatively low personnel costs.

KCT: Bringing up manpower is really a critical issue.

Kim Eui-suk: Before coming to KOFIC I was at Korean Academy of Film Arts (KAFA) for 7 years as professor of directing. I myself am a graduate of KAFA. As you can see in recent works like "Bleak Night", these students too have outstanding filmmaking skills. Yet personally I had hoped film students would make movies that have a more commercial approach. It seems themes and subjects of recent student works focus more on reserved, personal and peripheral stories. It won't be easy to have them change their taste entirely but in the end cinema is all about communicating with random audiences, thus to do so it is important to find a story that can be shared with them. KAFA has produced directors who have quality and marketability in the past such as Choi Dong-hoon and Bong Joon-ho. I hope to see more of these directors coming from the Academy in the future.

KCT: In the end, what do you think is development for Korean cinema?

Kim Eui-suk: I guess it would be encountering with more audiences and consistent production of fine films. Looking back a few years when many Korean films were introduced overseas, there were many different films made by renowned producers and directors with minor production companies. Also, there is a need to refrain from leaning onto only big companies but have medium sized investment production companies of various forms become active. The system needs to move in a direction where there are stimulation and competition while each can keep their own character. What's most important is to create an environment where new people can emerge continuously.

KCT: It seems you emphasize diversity in all sides. What kind of movies do you like to watch personally?

Kim Eui-suk: I truly love Korean cinema and meanwhile many of those that appealed to the public have touched my heart too. For instance, I like "Old Boy" and "The Man From Nowhere", and films by Bong Joon-ho and Kang Woo-seok.

KCT: What is your current goal?

Kim Eui-suk: Chairman of KOFIC is a position I've just taken, and since it is a new job for me I intend to do my best. I do have a near 30-year experience in making films, and I hope to feel gratifying when my term finishes. At least I would want to be able to be say I am not Ashamed of myself at the end of the day.

"Kim Eui-suk, New Chairman of Korean Film Council"
by HanCinema is licensed under a Creative Commons Attribution-Share Alike 3.0 Unported License.
Based on a work from this source