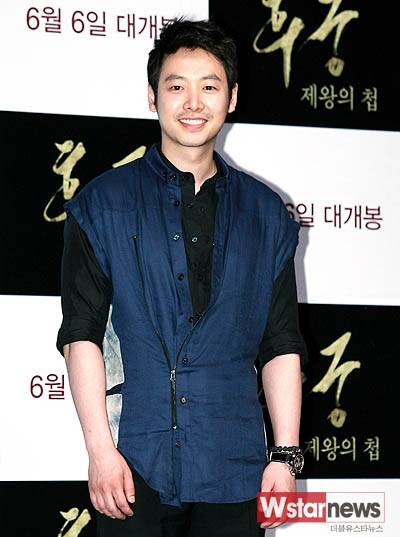 Kim Dong-wook has joined the public police relations on the 30th around 2 PM in the afternoon. He took some time to answer some questions before going in.

He said, "I will do my best and make sure I take care of the others as well".

He chose Cho Yeo-jeong and Jeon Hye-bin as the ones he wished most to come visit him while he's there. He said, "I spoke to them on the phone before coming here and they said they would come see me. I'll wait and see if their word is true".

Kim Dong-wok will be getting 4 weeks of basic military training and then is moving to the Public Police Relations where he'll serve on public duty for 2 years.

The Public Police Relations is where musicals are performed for the handicapped, lonely elderly people and youths. Actors Cho Seung-woo, Ryu Soo-young and others have been here and Lee Je-hoon is looking forward to coming here in October.

Netizen's say, "Take care!", "Apparently Lee Je-hoon and Kim Dong-wook are best friends", "We will wait two years for you" and more.

Meanwhile, Kim Dong-wook became famous through "Coffee Prince" and movie "Take Off" and recently starred in the movie "The Concubine".

"Kim Dong-wook joins the Public Police Relations"
by HanCinema is licensed under a Creative Commons Attribution-Share Alike 3.0 Unported License.
Based on a work from this source