Kim Dong-wan to perform in 'Hedwig' 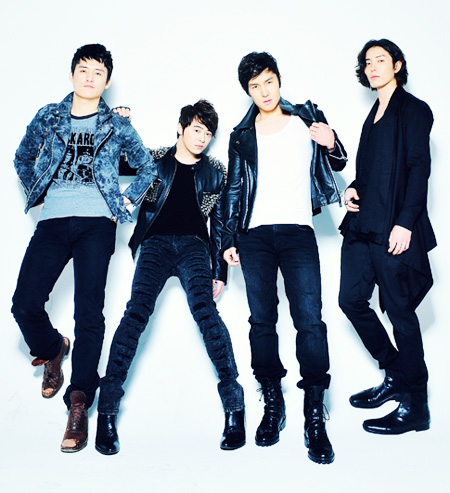 From left, Choi Jae-woong, Jo Jung-suk, Kim Dong-wan and Kim Jae-wook will play the role of Hedwig in the 2011 production of the musical "Hedwig and the Angry Inch", which will open on May 14. / Courtesy of Show Note

Kim Dong-wan of Shinhwa and model-turned-actor Kim Jae-wook will take the stage as a transgender rock singer in "Hedwig and the Angry Inch" from May.

Musical actors Jo Jung-suk and Choi Jae-woong return to play the rocker again and will alternate the role with the two Kims.

"Lee Gi-na, the director of previous productions of 'Hedwig', knows the show well and has been prominent in finding the individuality of the actors", an employee of Show Note said.

Costumes, make-up and even choreography and lighting will be customized for each actor, maximizing their characteristics.

Known for his masculine charm, Kim Dong-wan will be transformed into a tender-hearted, vulnerable singer.

"When he decided to act in Hedwig, he read the script and score over and over to understand the character", the Show Note staffer said. "He made his debut as a member of K-pop group Shinhwa in 1998 and has acted in several TV dramas and a movie. He will portray the life of Hedwig on stage in an honest way".

Kim Jae-wook has the perfect look for Hedwig. He gained popularity in the 2007 drama "Coffee Prince" and played a role of a talented homosexual patissier in the movie "Antique" (2008). Most recently, he appeared in the drama "Marry Me, Mary!". Kim is also the vocalist for underground rock band "Warlus".

"He will portray the delicate, keen sensibility of Hedwig", the official said.

Jo was in the 2006 and 2008 production of the show and Choi played the role in the 2009 production. Both were popular among musical fans and the two will offer renewed interpretations of the unique character.

First staged in 2005, the Korean rendition of "Hedwig" has received rave reviews including fervent standing ovations at the end of the performances.

The musical is written by John Cameron Mitchell, who also adapted the script for a movie of the same title as well as directing and starring in it. Stephen Trask composed the lyrics and played the guitarist in the film version.

With the backdrop of the seedy Hotel Riverview Hedwig, a failed transsexual rocker from East Germany and her husband Yitzhak will perform in concert, revealing the ups and downs of her life. Hedwig's monologues are backed up by rock band "The Angry Inch" and rough animations projecting the story.

"Kim Dong-wan to perform in 'Hedwig' "
by HanCinema is licensed under a Creative Commons Attribution-Share Alike 3.0 Unported License.
Based on a work from this source