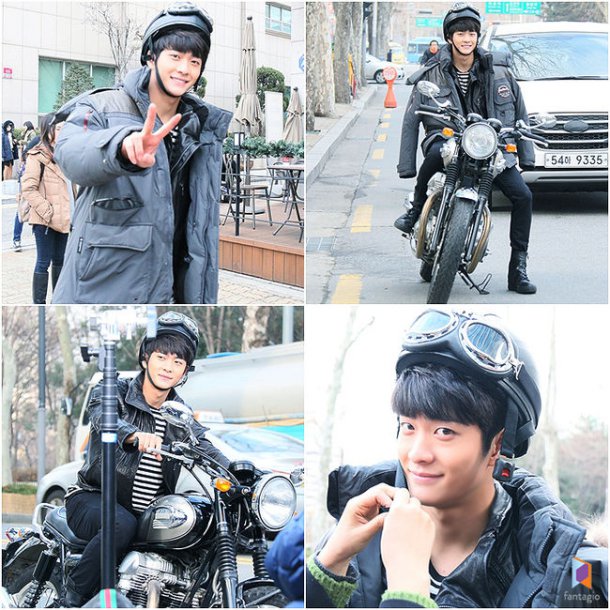 Kang Tae-oh (Surprise) plays the role of Heo Dong-goo in the new MBC weekend drama "The Queen's Flower". He became a biker.

Pictures of Kang on the 6th show him riding a motorcycle. He's wearing a jean jacket with a helmet and he seems confident. He's smiling at the camera with a 'V' too.

This scene from the drama reflects on the character of Kang Tae-oh and the innocent character he's become.

Heo Dong-goo is a friend of Kang I-sol (Lee Sung-kyung) whom he also has a crush on. He works day and night to pay off his father Heo Sam-sik's (Jo Hyung-ki) debts but never complains.

Kang Tae-oh debuted in 2013 with "See You After School" and appeared in the KBS 2TV show "Dream Team Season 2". He recently starred in a Korean-Vietnamese collaborated drama called "Forever Young" as Joon-soo.

Meanwhile, "The Queen's Flower" will begin to broadcast this coming 14th.

"Kang Tae-oh becomes an innocent biker"
by HanCinema is licensed under a Creative Commons Attribution-Share Alike 3.0 Unported License.
Based on a work from this source