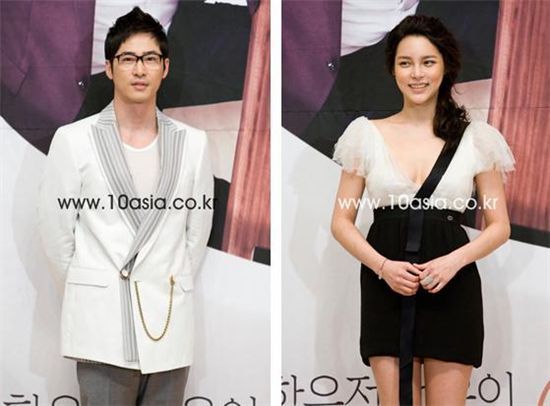 SBS' "Coffee House" is the second 'House' series from director Pyo Min-so and even in its production stage it is already causing a stir among the audience with its stars including Kang Ji-hwan's return to the small screen and the debut of T-ara member Ham Eun-jung as the leading actress. Ham plays the role of Seung-yeon who is an amateur in life living with no set goals while preparing for the level 9 public official test and after she meets a perfectionist novelist Jin-soo (played by Kang Ji-hwan), decides to endure the pain in order to become a professional. Below are the excerpts from the press conference for the new drama "Coffee House" with Korean actors Kang Ji-hwan, Ham Eun-jung, Park Si-yeon and Jung Woong-in.

10: Could you explain a bit about the characters you will be playing?
Kang Ji-hwan (Kang): I will be playing the role of Jin-soo who is a novelist. He is the most unusual and sort of four-dimensional type of character I have ever played before. I've been putting a lot of effort to give my character more personality by meeting with the director a lot of times since the planning stages of the drama.
Ham Jung-eun (Ham): I play the role of Kang Seung-yeon who was preparing for her test to become a level 9 public officer but becomes Jin-soo's secretary after becoming attracted to him. Seung-yeon's bouncy character is similar to my actual personality so I've been engaged in the shoots with the idea that I am defining her traits rather than being under the pressure to try and be funny.
Park Si-yeon (Park): I play Seo Eun-young, the C.E.O of the publishing company. I am enjoying the shoot since I get to play a bright and cheerful character since before, I played a lot of tragic female lead roles. And I like coffee so going to the set is even more fun.


Jung Woong-in (Jeong): My character is Han Ji-won, a business consultant. He is a comical character who tries to win back Eun-young's love after realizing she is 'the one' since breaking off their engagement two years ago.

10: Kang Ji-hwan, you are returning to the small screen for the first time since your role in "Hong Gil Dong" two years ago. Is there any particular reason that you chose "Coffee House" for your comeback?
Kang: I don't know if it's because writer Song Jae-jeong was the scenarist for MBC sitcoms "High Kick!" and "The Secret of Keu Keu Island", but "Coffee House" is unlike any other romantic comedy drama. With "Coffee House" the audience will be able to laugh in each episode because new incidents will occur each time rather than the emotions from a previous episode connecting to the next as in typical miniseries. I think I chose this production because it was refreshing -- after watching the first two episodes I realized that it subtly crosses in between a drama and sitcom.

10: Park Si-yeon, you have come to be able to change your image after having mainly taken on serious or dark characters.
Park: I am overcome with emotion because I have been dying to be in a romantic comedy. This is the first time I'm even bringing my own props for the shoot. Every time I go on set I feel like I'm going on a picnic because the atmosphere is so great. My character Eun-young is completely different from myself because she says whatever is on her mind.

10: So did you have any difficulties in portraying the role of Eun-young?
Park: I feel ecstatic. Being who I am doesn't mean that I have never wanted to scream. (laugh) It's really fun because I've pieced together all those parts and use it to portray Eun-young. I am enjoying it because it's something that I have never done before.

10: Director Pyo Min-soo once said, "I try to incorporate actors' actual personalities and their props in my dramas". Kang Ji-hwan, what was this like for you and did you prepare anything in particular?
Kang: I once saw Bill Gates riding a bicycle around his research compound on TV. I had always wanted to try it out in for a production so we changed the bicycle scene in the script to the segway that Bill Gates rides around in. I am trying to portray a completely different image of a novelist through reverse thinking because when one thinks of a writer, they usually think of them sitting at their desk. You can see it as the scenarist being the person who builds a house on a large prairie, and I and other actors as the ones who work on the interior design of the house. 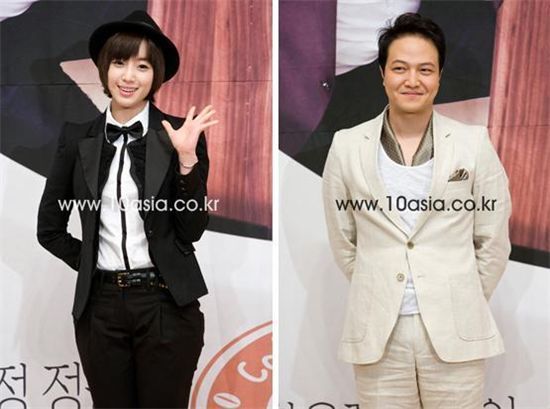 10: Jung Woong-in, you must be feeling quite different working on this drama since you are playing a leading role and are surrounded by all these young actors.
Jeong: I do, it being a production by Pyo Min-soo and the fact that it's a miniseries. Honestly, I feel that I have reached a status level with the stars. (laugh) I try to rid myself of the pressure I feel through acting. One of my strengths is that I am most composed at the moment I am nervous and I’m the sort of actor who knows to have more fun in front of the camera. If the drama goes well, I think producer Pyo Min-soo and I will form a great relationship. And I think I will keep calling him even if the ratings didn't come out that high. (laugh) I have never met such a great bunch of people like this before.

10: You play the role of Eun-young's fiancee. How did it feel to play a role opposite Park Si-yeon? I bet you probably felt proud too, maybe thinking 'I'm still doing alright'.
Jeong: I would be lying if I denied having thought about it. I also thought, 'What would happen if I get cut because Park doesn't like me?' (laugh) I started out with the confidence that Park will benefit from the acting pointers that I can give her. I think we'll be able to show good chemistry in the drama. I try to go on set even on the days I don't have any scenes to shoot so I can help monitor Park's acting.

10: Ham Eun-jung, your character Seung-yeon sports a short hairstyle and has an easy-going personality. How are you trying to establish your character since she seems to be similar to Eun-chan from "The 1st Shop of Coffee Prince".
Ham: I heard that a lot from the people around me. Hopefully those thoughts will disappear once the drama goes on air because my character's personality and the incidents she experiences are different even though both characters are boyish and wear boxed tee-shirts.

10: This is the first time you're playing an adult role as well as being the main star of a show even though you were a child actress. What was it like working with the senior actors?
Ham: The chemistry between Kang and me...(laugh)
Kang: She means it was good. When idols like something they usually just laugh. (laugh)
Ham: It really is great. That laugh was unintentional -- I think it came out because I've been living like my character.

10: How high do you expect the ratings to be for the first episode?
Kang: I just wish that before the drama goes off air, it'll break the record set by previous Monday and Tuesday night dramas at least once, even if it may not be a big success.

"Kang Ji-hwan wants "to break Mon-Tues TV ratings record""
by HanCinema is licensed under a Creative Commons Attribution-Share Alike 3.0 Unported License.
Based on a work from this source