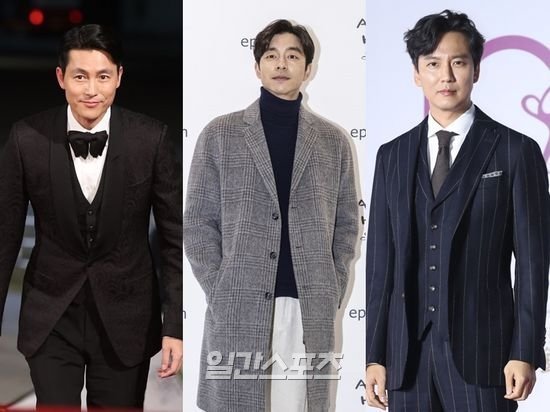 While the various good deeds of stars are in the spotlight, Jung Woo-sung, Gong Yoo and Kim Nam-gil stand out the most. These actors started off as young stars and have now grown into major stars who lead major films and dramas. They have learned the ways to use their own self the right way and be righteous no matter how strong the storms of life are.

They average 20 years or more in this industry. Unlike other stars who get caught up in small or big issues the more their popularity and influence increase, these actors have actually none to speak of. They've always been the best in their status and their age. They only age with their visuals, and their likeability is always on top.

Jung Woo-sung has had a great year with the movie "Innocent Witness". It was said that he made a good choice in his work and that it was the best character he'd ever played yet. His natural performance fit very well with his character and he broke the stereotype that 'nice' movies don't make it big. "Innocent Witness" went over the break-off point and swept away all the trophies at recent award shows.

Gong Yoo returned with "KIM Jiyoung: Born 1982" three years after the megahit drama "Goblin". He went from the world of gods to the world of humans with a small supporting role despite all the criticism and terror related to the subject matter of the film. He did better by making the movie a success. It proves that Gong Yoo's choice was not a mistake.

Kim Nam-gil is going through the second peak of his career with "The Fiery Priest". He practically put on a one-man show in the drama that became a widespread sensation. More dramas came along after "The Fiery Priest", but none did as well as Kim Nam-gil's did. It's strongly likely that Kim Nam-gil will be nominated for the SBS Grand Prize at the end of the year.

Achievements lead to credibility for an actor and this leads to social influence. Jung Woo-sung is being called a social activist, as he is paying more attention to not just entertainment and cultural matters, but society at large, becoming an exemplary model for future actors. He gets criticized sometimes, but he doesn't hesitate in what he thinks is 'right'.

Gong Yoo explained that he chose "KIM Jiyoung: Born 1982" because it was a path he wanted to follow. He went through some painful times because of the gap between the public's ideal version of him and his message as an actor. When he chose "KIM Jiyoung: Born 1982", questions were raised. However, numerous interviews and questions on stage after the release of the movie reflected Gong Yoo's thoughts as a human, and that made him even more attractive.

Kim Nam-gil resurfaced with Culture & Art NGO 'GILSTORY' as the director. The non-profit organization GILSTORY celebrates 5 years in 2020 since it was established for the purpose of aiding the Philippines when the storm hit. GILSTORY has been discreetly, but consistently conducting various campaigns and projects over the last 5 years with 100 cultural artists who share the same page. "Kim Nam-gil's Amazing Show" takes off next month with the purpose of supporting public art campaigns.

It's not mandatory, but those who are eager to move in the right direction must be commended. "It's only natural to support actors who create good influence in society with good intentions, openly or not, rather than stars who only bring about bad news 'unintentionally'", says a source. "Keeping a top-class position without disappointment for a long time is a big deal, and it's a bigger deal to raise one's voice during difficult times".

"Jung Woo-sung, Gong Yoo and Kim Nam-gil's "Handsome Influence""
by HanCinema is licensed under a Creative Commons Attribution-Share Alike 3.0 Unported License.
Based on a work from this source