Jo In-sung, Gong Hyo-jin, Lee Kwang-soo and others in "It's Okay, That's Love" 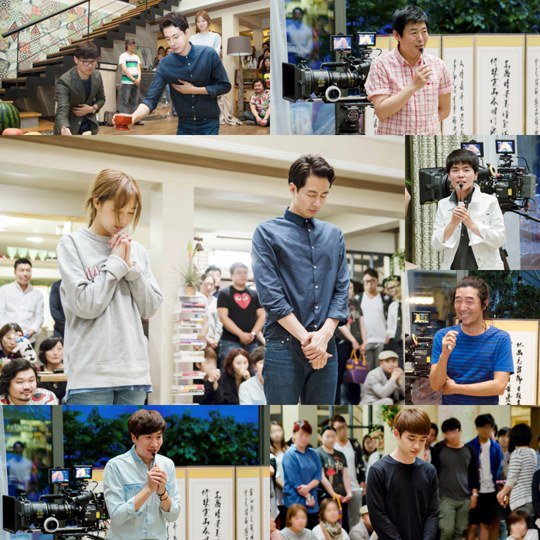 The "It's Okay, That's Love" team gathered for a traditional ritual on the 12th.

The ritual was held on a set in Icheon and Jo In-sung Gong Hyo-jin, Sung Dong-il, Lee Kwang-soo, Do Kyung-soo, Jin Kyung, Choi Seung-kyung, Choi Hee-seo, Han Jung-hyun, Lee Sung-kyung, Do Sang-woo and other casts, writer Noh Hee-kyeong, producer Kim Kyoo-tae, the staff and SBS drama CP Kim Yeong-seob were there. Jo In-sung arrived on the set earlier than usual although he didn't have work, so he encouraged his fellow staff and cast.

Producer Kim Kyoo-tae said, "There's no other team better than this. I am very happy to be working with such amazing people".

Writer Noh Hee-kyeong paid her respects solemnly and said, "I think safety comes first. Let's leave it up to the skies to take care of us" and high-fived Kim Kyoo-tae.

Jo In-sung said, "The art team, set team and other staff are working so hard. This drama is going to be successful because we are working with the undefeated Gong Hyo-jin. Let's all work and be merry". Gong Hyo-jin said, "I am so happy to be able to work with those who I've always wanted to work with".

Sung Dong-il said, "I don't step on anything if I am not sure about it. I am confident this will work. I expect "It's Okay, That's Love" to be a great hit". Lee Kwang-soo yelled cheers in the air and made everyone laugh.

SBS drama CP Kim Yeong-seob said, "The teamwork here is amazing. It reminds me of "That Winter, the Wind Blows" which was a great product. I hope this drama is a big hit this summer".

"It's Okay, That's Love" is the love story between Jang Jae-yeol, a detective story writer who has the looks and the gift of speech, and Ji Hae-soo, a mental doctor who is chic on the outside but is more humane than anyone else. This drama is to be released on the 23rd of July.

"Jo In-sung, Gong Hyo-jin, Lee Kwang-soo and others in "It's Okay, That's Love""
by HanCinema is licensed under a Creative Commons Attribution-Share Alike 3.0 Unported License.
Based on a work from this source