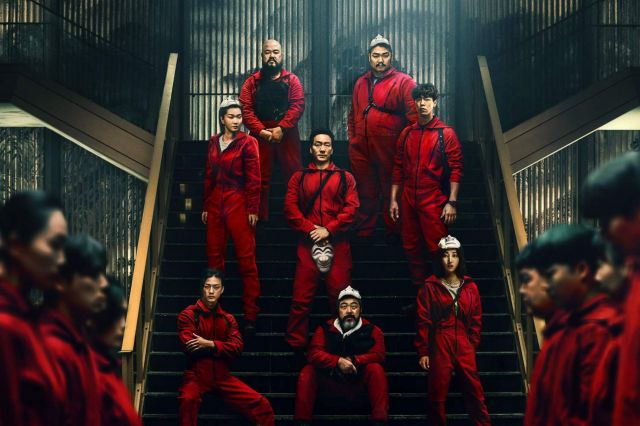 The most highly-awaited K-Drama of 2022, "Money Heist: Korea - Joint Economic Area" has finally landed on Netflix and is quickly rising up the ranks in the global chart of the most-watched shows on the platform. With the cultural impact of the original Spanish series and the magnanimous current influence of K-Content, this remake marks an iconic moment in the history of entertainment as the world gets reintroduced to the legendary dramatic universe of the original through the lens of Hallyu. 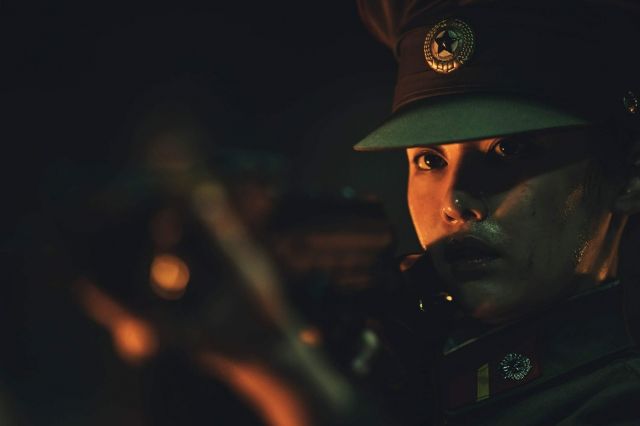 "Money Heist: Korea - Joint Economic Area" is set in a fictional future where North Korea and South Korea stand on the verge of reunification. The show opens with a young woman, played by Jeon Jong-seo, in North Korea, secretly listening to BTS. However, just being an ARMY is not enough. She must join the real military. Soon after, the government declares an end to the war, announcing the creation of a unified currency and the eponymous joint economic area. For our protagonist, this means a chance to live the "Korean Dream" and she leaves for Seoul at once. However, much like any idealistic theory, the illusion of the Korean Dream crumbles sooner than it was built when faced with the darkness of capitalism. Living as a refugee is hard enough but as a North Korean woman, she is twice removed from the fabric of society. Desperation leads to crime and crime turns her into a fugitive. That's when the Professor (Yoo Ji-tae) finds her and she takes the name, Tokyo.

Throughout the first episode, the recurring symbol of the train suggests a course of change and transformation. Tokyo goes through a rite of passage as she escapes her reality, grapples with the harshness of a new reality, and eventually, finds an escape from the same once again. The cinematography is cold and indifferent, much like the environment Tokyo is in, and has a similar unnerving effect on the audience. 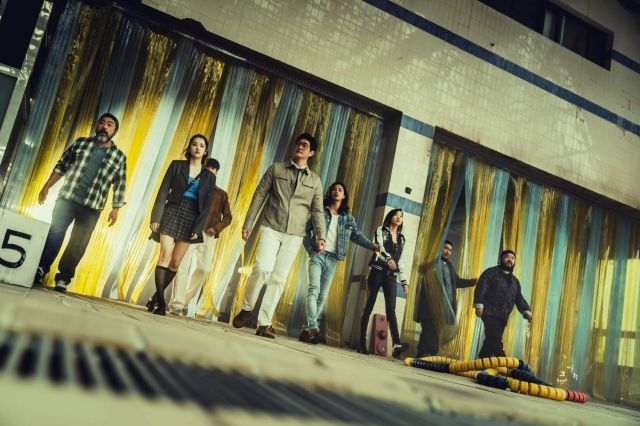 Right off the bat, "Money Heist: Korea - Joint Economic Area" posits an unrealistically paradisical image of South Korea, shaped by the glitz of showbiz. The K-Pop reference comes unexpectedly yet necessarily, indicating the socio-cultural standing of the nation in front of the world. The grander the vision, the greater the disillusionment and with no alternative, Tokyo hands her life over to the Professor. We gradually meet the rest of the Professor's crew, made up of good bad guys giving their life a last shot. This allows us to develop an attachment with each character, which later gives them free rein to act in the most humanly flawed ways possible without losing the audience's affection. 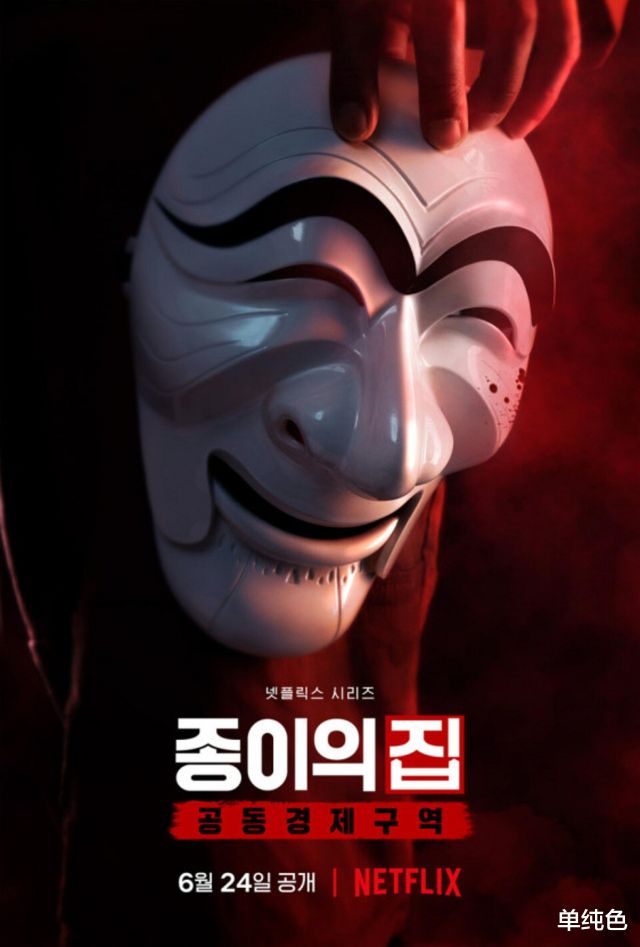 While the series closely follows the original in terms of foundation, it neatly improvises on the intricacies. Besides the obviously unique backgrounds and motivations of each character, the plot also takes certain creative liberties. The representative Dali mask of the original is switched with the traditional Hahoe mask, signifying satire and criticism of the elite. The smile on the mask is ironically intimidating, amplifying its impact. 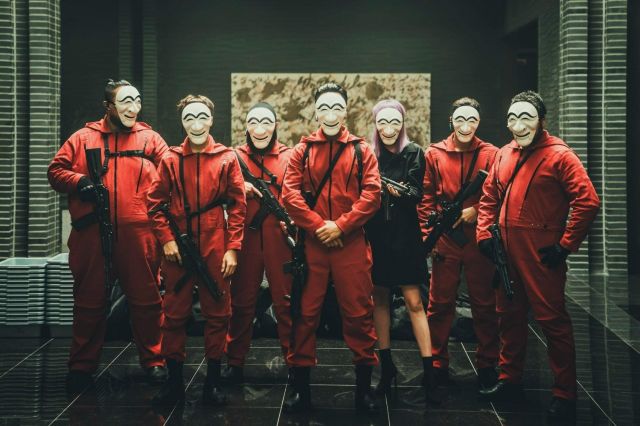 With such a brilliant cast on board, there could not possibly be any qualms about the quality of acting in the series. Park Hae-soo, in particular, who plays Berlin, reinvents his character rather than imitating the original, which is what makes him stand out. Park Hae-soo's Berlin has a much darker, grittier, and more brutal back story than the original and the actor does a marvelous job at translating that into his current personality as the leader of the bandits. You cannot help but root for him, despite his shortcomings. Yoo Ji-tae is powerful and venerable as the Professor, evoking both respect and wonder as the master manipulator. Similarly, veteran actress Kim Yunjin is a delight to watch on screen, complete with her unbelievable charisma and fiery determination. She is accompanied by Cha Moo-hyeok, the steely Captain from the Ministry of Social Security of the DPRK. He is bold, fearless, and strong-headed. Actor Kim Sung-oh's eyes say it all. 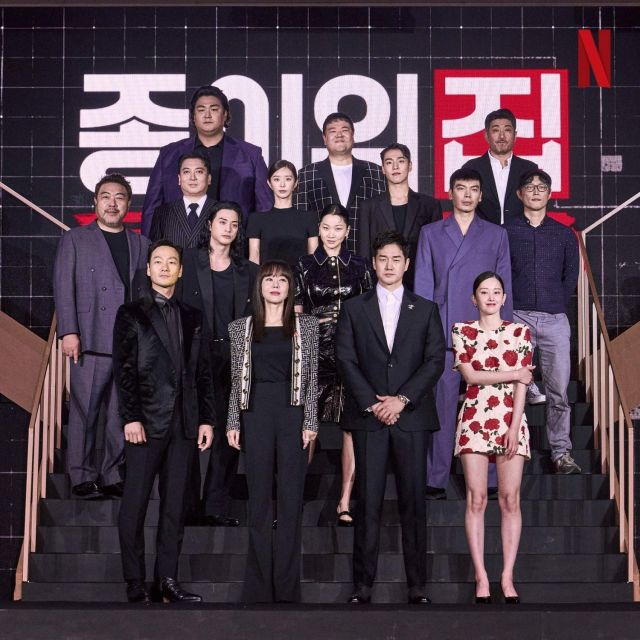 Jeon Jong-seo is excellent, as always, in the role of Tokyo, whose seasoned maturity is complemented wonderfully by Lee Hyun-woo through Rio's willful naivete. Nairobi is feisty yet personable and no one but Jang Yoon-ju could have essayed this role so effortlessly. Lee Won-jong's Moscow is an adoring father who brings a much-needed touch of familial warmth to an unforgiving situation. Even the audience seems to rely on him as a voice of reason among the band of robbers. Denver is admittedly more brawn than brains and Kim Ji-hoon-I still manages to make him look not only desirable but also heroic. His love interest, Yoon Mi-seon, is played by Lee Joo-bin with the most convincing sentimentality that easily makes her a fan favourite. Helsinki and Oslo, played by Kim Ji-hoon-IV and Lee Kyu-ho are intimidating yet endearing, which speaks volumes of how well they embodied their characters. The weight of the narrative is held together by Jo Yeong-min, played by the incredible Park Myung-hoon, who commendably drives the major action of the plot. 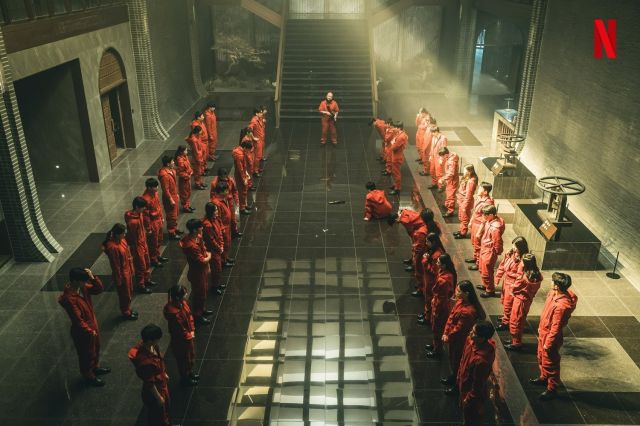 Much like the original, "Money Heist: Korea - Joint Economic Area" soon turns into "10 Ways To Mess Up A Plan" as the characters go awry, driven by the undeniable force of human emotions. Love is in the air for our robbers and Stockholm Syndrome lingers in the midst. What starts out as a brilliantly symbolic social commentary frequently devolves in seriousness to make way for romance, reminding us too much of the cheesiness characteristic of romantic K-Dramas. The condensed pacing of the series does not allow the scope for a justified expansion of these storylines, which makes them feel even more rushed and out of place. With only 6 episodes out, the group dynamic isn't heartening enough to strike a chord, even though their individual stories are rather intriguing. What is truly disappointing is that the Professor barely gets enough time to showcase his charms as a mastermind and Nairobi's potential is glossed over for the most part. By the time we see the first flames of resistance and revolution, we've already reached the end of Part 1. 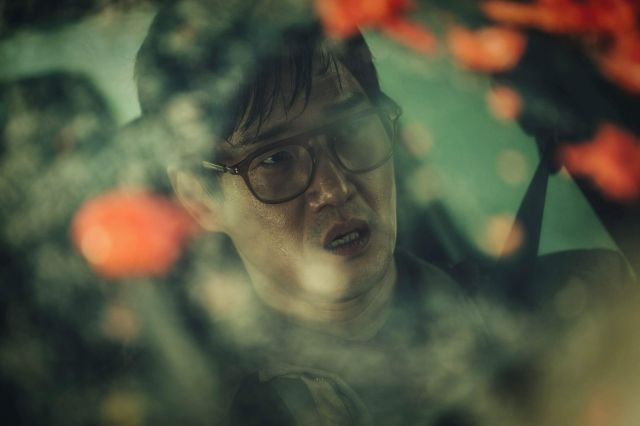 The tension that builds up around the end of episode 6 is enough to make us wish for Part 2 but not necessarily because we were left wanting more. It simply feels like we were cut off at an underwhelmingly awkward place and it would be a pity not to get to the end of things when they were just starting to get interesting. I cannot wait to see "Money Heist: Korea - Joint Economic Area" take the momentum of Part 1 and turn it into something even more amazing in Part 2. Until then, bella ciao.