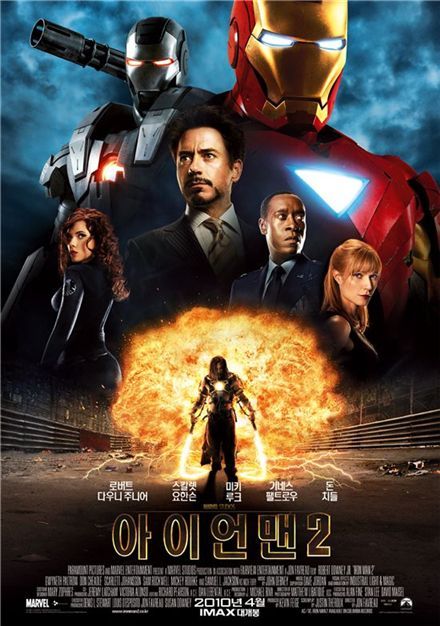 Official poster of the No.1 movie in Korea "Iron Man 2" [Paramount Pictures and Marvel Entertainment]

Hollywood action sequel "Iron Man 2" made a successful debut onto the Korean box office over the weekend, beating out previous winner "Bestseller" off the top spot.

Estimates by the Korean Box Office System (KOBIS) released on Monday revealed that "Iron Man 2" sold 1,360,820 tickets during the weekend of April 30 to May 2 to become the No. 1 film in the country.

"Iron Man 2", helmed by director Jon Favreau and featuring a star-studded cast of Robert Downey Jr., Don Cheadle and Gwyneth Paltrow, is about the new problems Tony Stark (played by Downey) faces after he reveals his identity as Iron Man.

Korean historical movie "Blades of Blood", starring Cha Seung-won and Hwang Jung-min, bowed into the box office in second place with 384,471 viewers while last week's winner "Bestseller" fell down two slots to No. 3 with 120,530 admits.

Meanwhile, Korean drama flick "A Long Visit" and Sandra Bullock's film "The Blind Side" followed sequentially in fourth and fifth place with 63,842 and 32,102 admissions, respectively.

Other films on the top 10 were "Republic of Korea 1%", "Sergeant Keroro The Super Duper Movie 5: Adventure in Space Time Island", "Clash of the Titans", "The Hurt Locker" and "Kick-Ass".

""Iron Man 2" soars to the No. 1 spot on box office "
by HanCinema is licensed under a Creative Commons Attribution-Share Alike 3.0 Unported License.
Based on a work from this source