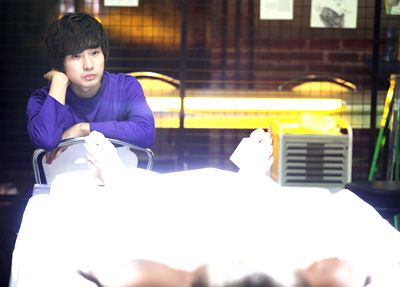 A scene from the new investigative drama series "God's Quiz". The cable show starts airing at 10.p.m. on Oct. 8. / Courtesy of OCN

Crime scenes, autopsies and stern faced criminalists and surgeons working together to catch a suspect: If this description reminds you of the popular television series "CSI: Crime Scene Investigation", tune in to the new Korean version titled "God's Quiz" on cable network OCN.

"Rare diseases are like quizzes made by the gods. They created them fearing humans will become arrogant. These quizzes are dreadful tasks we must solve", according to the press release for the drama.

And that's exactly what the new series is expected to do: solve mysterious crime scenes and accidents revolving around rare, unknown diseases.

Compared to U.S. and even Japanese crime and investigative dramas, Korean shows have not yet proved their influence on the television scene. Some say it's because of the storyline, while others argue about the content, but it's quite easy to say that despite efforts, such series have not yet attracted as many local viewers as they wish.

To scrap the old perception of local investigative dramas, the makers of "God's Quiz" are focusing on two themes: rare diseases and humanity.

"The drama will deal with unknown diseases such as porphyria, phenylketonuria and muscular dystrophy one at a time during each episode, the people who suffer from such diseases and also their loneliness. Suffering from such illnesses alienates them from society, causing loneliness, anger and even possible criminal intentions. We wanted to focus on them, the humanity", said Lee Joon-hyeong, producer of the 10-episode series, during a press conference Tuesday at the Press Center, central Seoul.

It's hard to say that the series was not reminiscent of well-known series at some point (zooming into a computer graphic-scene of the bone structure of the corpse or close-ups of the hands of medical experts handling evidence), but the actors, especially the lead Ryu Deok-hwan showed promise.

Ryoo definitely stood out. The 23-year-old is returning to the small screen for the first time in five years, and it was easy to see that he was doing his best in depicting his role of a stubborn, narcissistic and smart surgeon Han Jin-woo.

"The reason I chose to work on 'God's Quiz' was because it didn't simply focus on the crimes and medical feedback, but dealt with the people surrounding it, from the victims, killers, suspects and even corpses. It has a touch of Korean sentiment in it, and that also drew me into it as well", Ryoo told reporters.

Reporters asked Ryoo if he had a role model when acting, (Gil Grisson from "CSI" or Dr. House from "House"?), but the young actor shook his head and said that real people were his role models.

"I can't pretend to be someone by following another person who's trying to be someone else. It has to be as natural as possible. So I go out and watch real people, especially when I commute by subway. There is no better way to learn about characters than to watch people walk past in the subway", he said.

Another devoted actor is Park Jun-myun who plays the tough yet passionate medical examiner. Park explained at the press event that none of the actors used stunt doubles and all the cutting and examining of corpses were done by themselves with dead pigs.

"It's hard, but we're learning, so I guess that's worth all the nausea", she said with a weak smile.

Following in the footsteps of an already famous plot and format is hard, but it seems "God's Quiz" is up for the task. With a unique approach to crime, rare diseases and humanity as a whole, the new series is anticipating a stir among fellow fans of investigative shows and the overall drama industry.

"We hope it will not only attract local viewers, but also the world in the long run. We strived to bring a new drama format in a broader level and hopefully, drama fans will appreciate our efforts", Lee said.

"Investigative drama to deal with rare diseases, humanity"
by HanCinema is licensed under a Creative Commons Attribution-Share Alike 3.0 Unported License.
Based on a work from this source