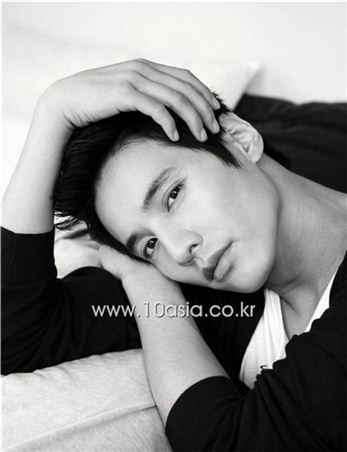 10: Then you must be more cautious about choosing new roles. What about a new movie do you regard as most important?
Won Bin: First, that the scenario is strong and what story it tells within it. And it was never on purpose but I think the roles I've played till now have been humane. They have always had an affinity. I think "The Man From Nowhere" too contains a form of love between a man and a child but I wonder whether I would've taken on the movie if there wasn't such form of communication.

10: But it doesn't seem like you're ambitious to become more popular or anything of the sort. It's not like you're interested in building a career overseas.
Won Bin: I think it would be good to be give such an opportunity as an actor. I've never had the opportunity to, rather than not being interested. (laugh) I'm actually not the type that does things aggressively. I'm rather the type that does his best at what he's been given.

10: Is that your personaltiy?
Won Bin: I have not been that type who takes the first step in doing something. I think I've always felt a big responsibility in having to do the best I can with what has been handed to me. That I shouldn't let down people's trust in me. I think a lot that I should do well at what I'm in charge of.

10: Then do you think your personality has had an effect on the path you've taken till now? It feels as if you create an image for yourself while carefully choosing your next role.
Won Bin: That's not true. Just because I took on the role that I did in "Mother - 2009", I didn't think beforehand that I should take on a role like I did in "The Man From Nowhere". I'm actually not picky about anything. I just go with whatever moves me so what role I play isn't important. What's important for actors is how well they do on a stage that has been created for them and what stage it is, along with being able to act with freedom within that.

10: But that stage won't always be somewhere you want to be.For example, you look more comfortable making fun of director Bong Joon-ho in a commercial for a beer. (laugh)
Won Bin: I'm sorry director. (laugh)

10: But it seems that people want to see more of the Won Bin from the recent coffee commercial. Do you ever worry about this?
Won Bin: What they want to see and what I want to show them... Maybe "The Man From Nowhere" is where that point meets?

10: I think that's right. In that sense, it seems that "The Man From Nowhere" is a movie that is important for you timing-wise and it also seems like you take control of the roles you play.
Won Bin: I'd be thankful to be regarded in that way. I think it was even more possible because of "Mother - 2009"?

10: What kind of person do you regard yourself as?
Won Bin: I try to stay loyal to the moment that I'm in as best as I can. Because it's a time that doesn't come back and you can't go back to it once you've passed it... Of course, there are going to be moments I look back on and regret but I want to live it so that I don't regret it as much as possible.

10: You don't have any regrets?
Won Bin: It wouldn't make any difference even if I did. The best thing is to be able to live every moment and I hope there isn't too much that I regret at the moment. There are going to be things I regret but I want to minimize that.

"[INTERVIEW] Actor Won Bin - Part 3"
by HanCinema is licensed under a Creative Commons Attribution-Share Alike 3.0 Unported License.
Based on a work from this source