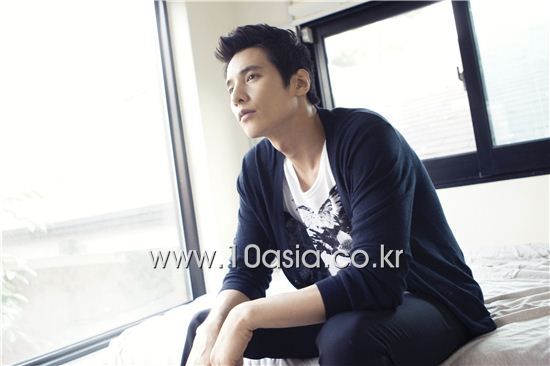 10: How did you feel about there being almost no change to his expression? And him saying very few lines. He shows most of his emotions through his eyes.
Won Bin: I think it's inevitable that he has become quiet because he hasn't gone outsid efor three years. He hadn't spoken to anyone and must've held great grief in his heart. I thought that it was only natural that there would be little change to his expression because of the character he is.

10: Wasn't it difficult trying to express your emotions through the slightest expression or look?
Won Bin: It was but it was rather more appealing. I think that the sadness he feels in his heart was delievered more effectively because he pushed down useless talk rather than expressing himself overly or shouting out loudly.

10: Many people see you as the type that doesn't talk a lot. Do you think you're similar to Tae-shik in that sense?
Won Bin: Every role I have played has been similar to me in some way or another and it was the same with Tae-shik too. Well, rather than saying we're similar... Spending time alone? (laugh)

10: What Do You Do? when you're alone?
Won Bin: I draw or take photographs. That's my long time and that's when I feel that most comfortable. I like doing things with other people too but I also need time to spend doing things on my own. Drawing makes me stabilize emotionally when my mind is tangled.

10: I think people may feel distant from you because you mainly appear in movies so that makes you more difficult to approach. Because we don't get to see you often.
Won Bin: Isn't that the case with everyone else too? (laugh) I actually do wish I could meet everyone more often through more acting roles. But some movies get released two years after they've been filmed -- even with "The Man From Nowhere", I decided to do it two months after I got done shooting "Mother - 2009" but it took a year to get released. That's why people may feel distant from me but it's also that it has taken a long time fo rsome of my work to reach the audience. I actually do want to take things slowly though.

10: Well it doesn't seem like you're impatient.
Won Bin: It would be good to show the audience many things in a short time but I'm going to stay an actor for a long time. So I think it would be good to gradually accumulate [on experience].

10: Has such an attitude had an influence on your decision to take on "Mother - 2009"? It ended up being a good choice but it could've also ended up being an irrational decision.
Won Bin: I could depend on director Bong Joon-ho and Kim Hye-ja and I thought there would be something I can show through the movie. Before "The Man From Nowhere", people saw me as the roles I had played before, for example, many roles that I was offered were ones where I was a soft-hearted. But I chose "Mother - 2009" because he recommended it to me seeing the possibilities I had. I wanted to go for it with the mind that I'm taking on a new challenge.

10: What do you think you gained as an actor through "Mother - 2009"?
Won Bin: I was extremely nervous while filming "Mother - 2009" but I also felt free at the same time. I think I was able to approach acting a bit more and stand in front of the camera more comfortably while feeling that it's more fun.

10: It wasn't fun from the start?
Won Bin: I still don't think it's fun. It's difficult rather than fun. But I think I keep doing this because of the disappointment. I keep thinking that I could probably do better with my next role in some way. Of course, I do feel a catharsis from acting. I feel joy from that and tell myself that I want to do better the next time.

10: Where do you think was the catharsis with "The Man From Nowhere"?
Won Bin: I think I'll become sure of it when I see how the audience responds.

10: Have you ever watched it with the audience in the theater?
Won Bin: I couldn't because of the stage greetings. And it's difficult to watch movies with them. I don't have enough time when a movie is being released. And it somehow still feels awkward to watch my own movie in a theater.

10: What sort of movies do you like as an audience?
Won Bin: I'm not picky about the genre. And I don't think I should be since I'm an actor. I try to do as many genres as possible.

10: Then do you have a picture for what kind of actor you want to be in the future?
Won Bin: I just work hard. It's my desire to do my best so that I make the best movie possible so that I don't regret it and if the results are good, I hope to become an actor that someone wants to become like. 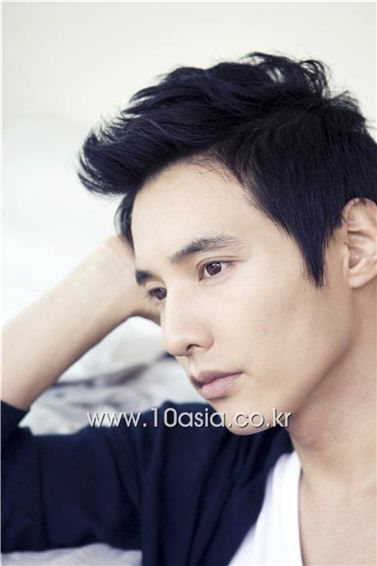 Actor Won Bin poses during an interview with 10Asia.

"[INTERVIEW] Actor Won Bin - Part 2"
by HanCinema is licensed under a Creative Commons Attribution-Share Alike 3.0 Unported License.
Based on a work from this source