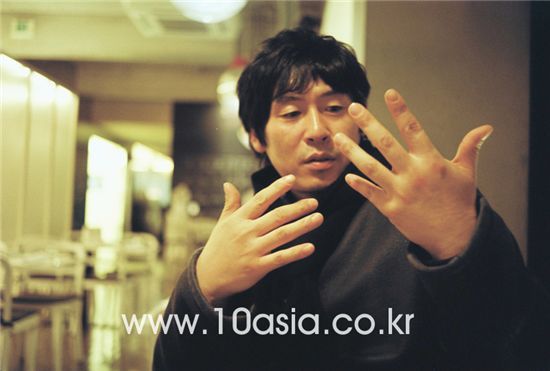 Beck Una (Beck): "Haeundae" is actually on weird coordinates in terms of your filmography. In comparison to your past films which had a single main character, "Haeundae" was a film which didn't necessarily need you to be part of. On top of that, director Yoon JK is known for creating commercial films. So I've been curious to know how you got to work on this film.
Seol: I was once asked which director I work best with. To that I answered, "None of them". I make things work. "Haeundae" seemed like a movie calling for trouble. Like it would become a massive hit or flop horribly. Director Yoon may seem smart and clever on the outside but he seemed innocent in my eyes. I didn't see any murkiness in his eyes. And I am great with directors. Ryoo Seung-bum was surprised at me while shooting "No Mercy". He said I listen to well to the director. But what would I do? I'm not the director. The actor should listen. Of course, it gets annoying when my actions become limited. It's tough when the director limits my actions within the camera's angle. As long as I'm not trapped inside an angle, I can listen to what the director wants.

Beck: I felt from interviews that you were a hard time especially while shooting "Voice of a Murderer" -- that you were feeling lonely.
Seol: I was having a hard time personally. And it peaked during the times I shot "Cruel Winter Blues" and "Venus and Mars". To an extent I felt bad for my manager. I'm usually not the type that lets my personal life interfere with my work. But I felt that I failed to cut off my emotions in front of the camera during those days. Couldn't hide it in the expression -- it would all show. I feel very bad for director Han Ji-seung and actress Kim Tae-hee. I really was at my worst during "Venus and Mars"! The phrase I used often back then was that I had hit rock bottom. But I feel much more at ease after hitting rock bottom. The phrase I use most often nowadays is to 'go with the flow'. In a way, I might be even more bold than I used to be. (laugh)

Beck: Do you ever feel your energy is draining out now that you're 43-years-old and act more with your body and instinct rather than by using your brain?
Seol: I think I'm the healthy type, I don't get sick easily and I'm still spry. We started shooting the autopsy scene for "No Mercy" in the morning and stayed up all night. And I still wanted to keep shooting. I liked the fact that the dark circles under my eyes were showing, that my eyes were losing focus and my face becoming more haggard because it seemed to fit the scene so well. So I said, "Let's finish up this scene today! Regardless of the time". And we had been shooting till seven in the morning when I noticed that I was the only person who was still lively and that everyone else was sleeping in some corner. I couldn't ask to keep shooting in that situation so we stopped. I don't get sleepy when I'm on set. Never. I think my willpower makes me forget about sleep.

Beck: By the way, I can't help noticing that your hands are large and thick, everytime I see them.
Seol: We went all the way to Paju while shooting "Public Enemy" because of my hands. We suddenly needed a double for my hands but we hadn't been able to find a pair that look like mine. (laugh) My hands looked like pig feet which had been drained of blood after shooting a fighting scene with Jung Jun-ho at the pool in "Another Public Enemy" because my hands had swollen up so much.

Beck: Well because of your hands and your character Kang Chul-jung, people easily related you to the image of being a 'rough guy'.
Seol: A lot of people who don't know me well really do seem to think I'm a very rough person. And violent. But they'll say they're taken by surprise after they get to know me. What's there to be so surprised about, this is me, right? I'm just some person who is very shy.

Beck: It seems that young male actors these think taking on a romantic movie is stepping down a step as an actor. And that is why they keep going for more masculine roles where they can look tough and rough. On the other hand, you, who keeps insisting that all your films have been romantic ones since "Peppermint Dream" (laugh). Would you still be interested in taking on a proper romantic film?
Seol: Well, romantic films... I don't know when it will be but I think you can only start doing real romantic movies after you turn 40. Not about events or dating. But stories about the essence of love.

Beck: Do you still cry well? I still so clearly remember you telling me how you sobbed alone in a motel room while reading the scenario for "Rikidozan".
Seol: Well, there's been a lot of changes to my personal life and the environment around me but I don't think I have changed that much. I still cry easily and choke up. Of course, I try to hold back the tears now. Rather, there have been times recently where my eyes tear up for no reason. And I'm not suffering from depression. (laugh)

Beck: Well we've somehow reached the year 2010.
Seol: Yes, and it'll be the start to another ten years... I think the remaining ten years will be quite interesting. A decade is such a long time. Of course I might die before that (laugh) so let's meet up often and for a long time.

"[INTERVIEW] Actor Sol Kyung-gu (Part 3)"
by HanCinema is licensed under a Creative Commons Attribution-Share Alike 3.0 Unported License.
Based on a work from this source