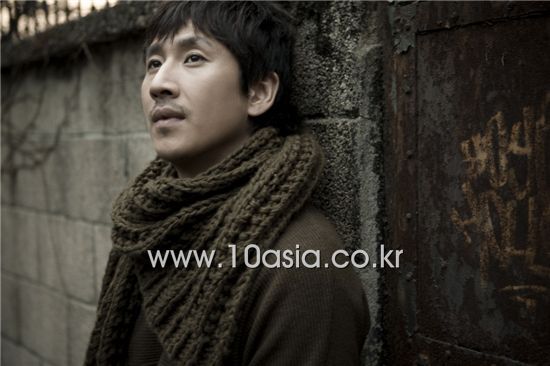 "I think all guys are the same when they become dads, in the sense that we think that we need to take care of our family as the breadwinner of the house rather than wanting to become a certain kind of actor", actor Lee Sun-kyun said in his mellow ringing voice. This man, who viewers thought would wait eternally for the main female character in his movies and dramas with his mild voice and gaze, has become a real man who now has a wife and son. And it may be coincidence but with his more recent roles -- from film "Paju" and "Oki's Movie" to MBC TV series "Pasta" -- Lee at times became violent and sometimes even a loser instead of the angelic romantic guy he was most often regarded as. The reason that romantic comedy pic "Petty Romance" comes as a pleasant surprise to fans is that he has gone back to working on a romantic story but has managed to play a character with a sharp temper. Some viewers may think he has merely made a change, while others may think he has matured. Maybe the interview below will help you make a clearer judgement.

10: Your moustache is what stands out to me the most about you from the very start.
Lee Sun-kyun: It was my look in film "Petty Romance". The script for it had originally said my character is not well off financially but still looks amazing on the outside, looking like a model and dressing nicely as well. But this didn't seem to go with the circumstances he is in. I also wasn't confident about how I'd look because I'm not the type that would ever 'wow' the audience, no matter how much I dress up. So I suggested to the director that we take out such glamorized aspects regarding my character and instead said he should look like a guy who's drunk in the parking lot of the Hong-ik University area since he's someone who draws, hasn't been able to make an official debut and can't make good money. I went to Dongdaemun myself to set the clothes for my character and changed his style many times. I also thought his hair would be more important than his clothes so I got my hair permed the way you see it in the movie. And then I grew a moustache because I thought it would go with the hair. But after we finished filming the movie, I shaved it off but it felt so weird. Like I had my eyebrows shaved off. So that's why I've sort of kept it. People make fun of me, saying I look like a beggar. (laugh)

10: Are you sensitive when it comes to making visual changes in setting your character?
Lee Sun-kyun: You have to pay attention to it. And it's not about trying to look good but it has to be a look that convinces me and one that I can embody. It may not seem like anything but I consider it one of the ways to approach a character. 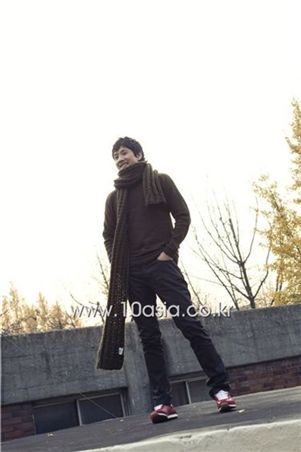 10: And was that easy to do?
Lee Sun-kyun: I had fun with it. I was a bit worried in the beginning but felt very comfortable and no pressure in the end.

10: What were you worried about in the beginning?
Lee Sun-kyun: That at first, my character wasn't fully established. And mid-way, we had to shoot a bed-scene so I was trying to watch what I eat, staying away from salty food in particular, which I think made me feel cranky. I get a bit annoyed when I don't eat salty food. But how happy and comfortable I felt once I was done filming the bed-scene. Ah, I see now that I had a hard time because I hadn't been able to eat properly. (laugh)

10: Does it have to do with losing weight? You said after drama “Pasta” that you should take care of your body.
Lee Sun-kyun: That was because when I'm tired, can't sleep well and am stressed out, I gain weight. That's why I gain a lot of weight when I'm shooting mini-series. I had gained five kilograms by the time I was shooting the final episode of “Pasta” compared to the first episode. And it's not like I ate a lot. [Kong] Hyo-jin made fun of me, saying that I should lose some weight. So that's when I told myself I should workout. I can't seem to be able to manage my body as fast as I used to be able to after entering my mid-thirties. When I was in my twenties, no, even in my early thirties, I could make something close to a six-pack by just eating less for about a month, but my body has become tolerant to it so I need to put in several times the amount of effort now. You need to maintain a certain something now. That's why I started working out and managed to drop enough weight to be in the high-60 kilogram range for “Petty Romance” but I've been gaining weight ever since we wrapped up filming for that. Nonetheless, staying in shape makes it easier to drop weight later when you need to.

10: So are you trying to stay in a state of zero?
Lee Sun-kyun: I think that is what's important. Staying neutral.

10: What type of person is the Jung-bae that you saw in your neutral state then? At a glance it seems like he would be the type who has a strong artistic ego.
Lee Sun-kyun: He is. And that's why he can't make money. He has a strong ego, is short tempered but after getting a writer (Choi Kang-hee) to work with him, he bickers with her since he can't blow up at her, and then at one point, starts developing feelings for her. In a way it's your typical romantic comedy but aren't all romantic comedies the same? There won't be any twists but instead contain trivial elements of fun. So I think it's a movie that'll fully satisfy the needs of couples who will go to theaters in search of a romantic comedy in December. It has a happy ending and the music is great as well. It contains everything that goes well with romantic comedies. 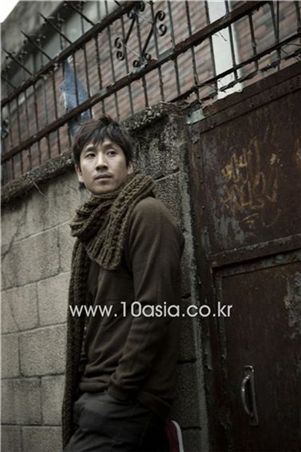 10: In that sense, I think “Petty Romance” is an exquisite title for the film because in reality, romance is pretty much a sequence of petty incidents.
Lee Sun-kyun: I actually hadn't liked the title in the beginning. I liked the word 'petty' but not 'love affair' because I felt like it explicitly showed that our movie was a romantic comedy. But I was the only one who was against the title so we decided to go with it. (laugh) I realized afterwards that the title actually goes extremely well with the movie. Dating itself is petty and the way the two main characters work together is petty as well. I think it's a well-thought up title.

10: It must be important to have good chemistry with your scene partner, especially for the scenes where you two bicker. How is it working for the second time with Choi Kang-hee, the first time being SBS TV series “My Sweet Seoul.”
Lee Sun-kyun: We were able to work together again because we like each other. We both like "My Sweet Seoul". The show didn't do that well in terms of ratings but our relationship was really like that of Young-soo and Eun-soo from the drama. We spoke to each other in the honorific form and [Choi] Kang-hee had too many scenes to shoot while director Park Heung-sik takes a long time to shoot scenes, as if he were shooting a movie, so we didn't even have time to have a meal together. And when we meet, she'd seem so tired so we weren't able to become close. However, I had felt that it would be nice to work with her later on as a couple in a more fun and comfortable movie and it turns out that she had felt that way too. That's why this has been a good opportunity. No matter how much we want it, it wouldn't have happened if it's not meant to. For example, we wouldn't have gotten to work together if I was working on a different role.

10: Well you probably get good marks for every romantic drama you star in because you have good chemistry with the actresses.
Lee Sun-kyun: There really isn't anything that I do in particular. And it's not like I treat them particularly well. I've just been lucky in getting to work with good actresses. For example, Gong Hyo-jin really didn't spend much time preparing for her role in “Pasta” but she was really good. It's extraordinary in that it didn't seem like she looks at her script a lot and was always playing with her i-Phone but would do an amazing job with her scenes as she goes into shoot. It was to the extent that I was shocked. That's why she's a good actress. From how I see it, all that you really need to do is an honest and natural job with your acting. If my acting is honest and natural, my scene partner will give me back something that's also honest and natural. That's also how you can make things more fun.

10: And it was because of how natural you guys looked in “Pasta” that people said you two really might be dating. (laugh)
Lee Sun-kyun: My wife told me she had heard that from someone. How funny is that? (laugh) You need time to actually be able to date someone... but I had a lot of lines for the scenes in the kitchen. I sometimes didn't think I'd be able to memorize all the lines I had been given because we'd sometimes shoot several scenes from the kitchen in one go. I sometimes felt that it was unfair that I'd have to talk away when everyone else didn't have that many lines to say. I wanted to say or do something to the ones who would playing with their iPhones. (laugh)

"[INTERVIEW] Actor Lee Sun-kyun - Part 1"
by HanCinema is licensed under a Creative Commons Attribution-Share Alike 3.0 Unported License.
Based on a work from this source