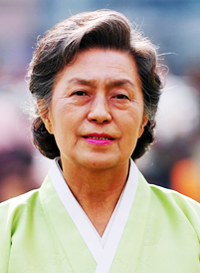 Kim Eui-jung, 70, chairwoman of the Myung Won Cultural Foundation, was selected as the best instructor in a recent survey of 25,486 civil servants who received education from the Seoul Human Resource Development Center, the center said Monday.

The public officials picked Kim as the best instructor in a satisfaction survey on 761 teachers who taught at the institute for the past year. Kim topped the list by receiving 4.4 points out of 5.

Kim, who was designated as Seoul City's intangible cultural asset of No. 27 for having a unique knowhow of the traditional tea ceremony, lectured at the center over seven times on the theme "Our Cultural Art". Kim is the second daughter of the late Kim Sung-gon (1913-75), who is the founder of Ssangyong Group. She is also the president of the National Folk Museum of Korea.

The Myung Won Cultural Foundation is an educational institution of Korean tea culture and ceremonies, which is recognized by the government.

Founded by the late Kim Mi-hee who went by the pseudonym Myung Won, the foundation has continued to preserve, develop and promote traditional Korean tea ceremonies. The late Myung Won dedicated her life to restoring and revising the traditional tea ceremony and Chairwoman Kim is continuing her mother's legacy.

"Intangible cultural asset selected best instructor"
by HanCinema is licensed under a Creative Commons Attribution-Share Alike 3.0 Unported License.
Based on a work from this source