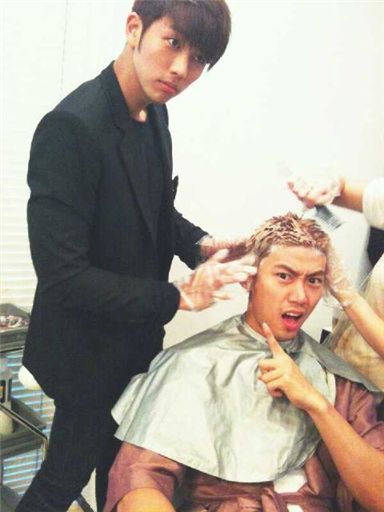 Korean idol Im Seulong has revealed a picture of himself styling 2PM member Ok Taecyeon's hair on his Twitter account.

The 23-year-old singer uploaded a photograph of himself yesterday dying Ok Taecyeon's hair, with a comment underneath saying, "I am hair designer Ong. I am currently working on someone's hair".

Fans who have seen the photograph have left responses such as, "You're facial expression is the best!" and "You can do my hair too!"

Im Seulong made his debut as one of the members in the four-member ballad group 2AM in 2008. They are well known for their many hit songs including "This Song", "Can't Let You Go Even If I Die", and "I Did Wrong".

Outside of his group activities, Im Seulong has appeared in the MBC's hit series "Personal Taste" and is one of the hosts for reality TV show "We Got Married".

He was recently in Busan for the Pusan International Film Festival for his movie "Acoustic".

"Im Seulong turns hair stylist for a day"
by HanCinema is licensed under a Creative Commons Attribution-Share Alike 3.0 Unported License.
Based on a work from this source