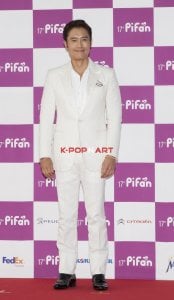 Given that Lee Byung-hun is one of the top-rated Korean Wave stars, it comes as no surprise that he is interested in grabbing a role for a Hollywood movie. The question is when and how he pulls it off.

"Some news media reported that I already entered Hollywood, but it's not true at all", Lee said in an interview. "Our agents are arranging meetings with Hollywood people, but I haven't found a role I could take".

Lee said he has indeed met with some of the top officials at famous studios such as Fox and Universal and got some proposals, but found the proposed roles not suitable for his image.

"I don't want to debut as another Asian actor who does some martial art. I want to play an independent role on an equal footing with other American actors in a Hollywood film", he said.

Lee received two casting proposals to play Asia's "James Bond", a main supporting role to top Hollywood actors, but he has not opted for such roles yet. The main reason was that he did not want to play a Bad Guy in a Hollywood film. "I guess a sense of pride for my Asian fans was also at work when I rejected such roles", he said. Such casting meetings are usually held in the United States, and he said American filmmakers are showing great interest toward Korean actors and directors.

"Nobody knows who will be the first to enter Hollywood. It could be Jun Ji-hyun, or other famous Korean directors. What's certain is that we are now near the starting line", he said.

Though a Hollywood debut is certainly important, Lee's focus is now placed on promoting "Once in a Summer", a melodrama directed by Jo Geun-sik. In the film, Lee plays an elderly professor tracking down an old lover, played by Soo Ae ("Wedding Campaign", "A Family").

"This is the first time that I'm acting as an old man in my entire career", Lee said. The movie portrays a young college student in 1969, and how he encounters his love in a rural area. The story itself unfolds as the man, now in his 60s, tries to track down his love in a flashback technique.

"Director Jo was considering casting another actor to play the elderly professor, but I insisted I had to do the role because I thought that would be more natural", he said.

Special makeup was tested for Lee, and the result turned out to be far from natural. "We hurriedly set up a special makeup test, and the final result was a strange, old guy - someone in a mystery thriller film", he said, laughing.

Instead of special makeup, director Jo asked Lee to use conventional makeup, which still took about two and a half hours to finish. "I didn't realize how difficult it was to play an elderly man, or me in my 60s", he said. "I'm stuck between the college student in his 20s and the professor in his 60s, because I belong to neither group", the 36-year-old actor said.

Lee said he is aware that more people in Korea and elsewhere are now paying attention to him, but he doesn't feel comfortable categorizing himself as a Korean Wave star.

"Frankly, I don't know anything about the qualifications for becoming a Korean Wave star, and I'm trying not to categorize myself. What I know is that more people know me and watch my films. I think that's good, but I also feel greater responsibility", he said.

Lee said such public attention sometimes puts enormous pressure on him, but he tries to return to his own identity. "Now that many people are watching me, do I have to be a morally perfect man? I don't think so. I believe such an attitude means a rigid way of thinking, and I don't like it as an actor. I don't want to narrow the scope of my behavior. I want to be free", he said.

"[HERALD INTERVIEW] Lee Byung-hun eyes Hollywood"
by HanCinema is licensed under a Creative Commons Attribution-Share Alike 3.0 Unported License.
Based on a work from this source