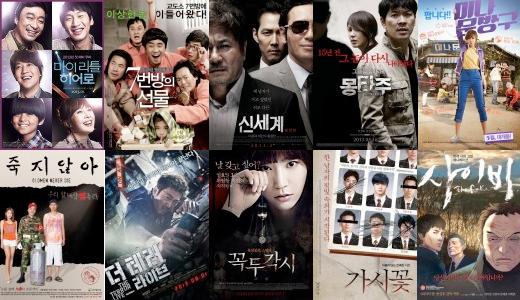 A few ground rules to start out with. First, the only movies going on this list are the ones with a South Korean release date of 2013. Including any films not released in that timeframe would just be unfairly tantalizing. It's bad enough that most of my weekly reviews are for movies you're not going to be able to watch for several months. Second, I'm kind of skeptical on the concept of Top 10 Lists in the first place. My Top 3 are pretty definite, but everything after just lies in the generic range of "pretty good". Believe me- there are ones I'd like to include here, but I decided to err on the side of obscurity, since hey, isn't finding new stuff a lot more fun anyway?

As usual, use in your own judgment in considering these movies- my purpose is just to describe them well enough to make an informed decision possible. Let's get started-

A heavily musical piece, "My Little Hero" is the story of a mean, casually racist music director and the young multiracial boy he mentors through a televised showtunes competition. There's tremendous heart in the performances here, and the musical setpieces are top quality stuff. The synthesis between narrative and spectacle is extremely well done, building a story with genuine emotional resonance.

A mentally retarded man facing a death sentence for a crime he didn't commit receives secret visits from his daughter and changes the lives of everyone around him for the better. You know, there isn't really anything I can add to that. Yes, the premise is schmaltzy and absurd, but this is a story about the importance of holding empathy for your fellow man. "Miracle in Cell No.7" is, if nothing else, determined, and that's an energy that translates well to the screen.

I've said it before and I'll said it again- a gangster flick is about the last place I'd expect the addition of melodrama to be an improvement, and yet here we are. "The New World" takes a serious psychological look at what deep undercover assignments can do to people, and the choices people make, while not being clever script-wise, are astonishingly close in line to our social needs and beliefs. Also the gangster stuff is pretty hardcore.

Sometimes this movie is just a little too slick for its own good, seeming to clearly favor style over substance. But what substance there is when we finally get to it hits like a freight train. It's rare to find a crime thriller that does such a good job getting the audience to identify with all of its characters, even when one of them is pretty clearly horribly evil. That's sobering stuff even in the face of a mostly happy ending.

Nostalgia culture isn't really something I'm all that thrilled about, since I consider the best parts of childhood as being the ones that involved fun stuff, not whatever corporate logo was nearby at the time. "Happiness for Sale" is a superb blending of these moments in search of a better balance, and does a wonderful job catching the idea that commercialism is only bad if we let it turn us into vicious cutthroats. The visual sense is lovely in its exploration of these ideas.

My theory on the title- it does not literally refer to the titular old man's apparent immortality, but rather provides an explanation as to how his apparently vicious backwards ideas manage to survive generation to generation. A family tree that goes from fascist to democracy activist to basically worthless slacker is one that transcends national boundaries. So too, does "Old Men Never Die" present an unsettling mystery with an equally unsettling resolution.

These days terrorism is big business. If the cynicism in that sentence makes you recoil in digust, well, maybe "The Terror Live" isn't for you. With Seoul in a crisis of panic, it's up to one radio host to talk down the mad bomber. Except he's not really a mad bomber. All he wants is an apology. How does this result in a movie filled with explosions, crisis points, and a rather horrifically justifed final choice? Well watching the movie is the whole point of answering those questions isn't it?

Hypnotism induced sex is hardly a new concept. What makes "A Puppet" so special is the relentless effort it goes to, not just to mock the childish lead character who thought this was a good idea, but the audience for even daring to be entertained by such a comical concept in the first place. This movie has the greatest sex montage I've seen in the way it managed to pivot my reaction from amusement to annoyance to holy smokes even the guy's figured out how stupid and pointless this is. "A Puppet" is a magnificent statement on what it truly means to be pathetic, an allegory on how adult creature comforts are no proof of adulthood.

The funny thing about rape is how the responsibility is always on the woman. I don't mean in the sense of stigma- in terms of preventing rape or educating people or bringing the perpetrators to justice, it's always women who have to have the agency to get anything done. The simple-minded lead in Fatal is the only person dumb enough to wonder just why that is. "Fatal" is an unsettling take-down of rape culture, examining in close detail the way men shrug off any responsiblity they may have as far as someone else's problem is concerned. The film is tense stuff, with exactly the kind of harsh messaging we need to be hearing more of in this modern age.

In action films, typically the most important character in any given scene is the one who can beat up all the others in a fight, whether that arena be fisticuffs or just being able to prove the other guy's a lying asshole. "The Fake" takes this idea to a horrifically dark extreme. Our hero's a vicious psychopath who's only doing the right thing because one of the bad guys pissed him off. Other weak-willed characters without the stomach for this kind of nauseating violence and brutality are forced to make difficult choices about what the right course of action is in a world that favors monsters. The result is a horrifically dark, soul-crushing work that begs a lot of questions about the people and gods we put our faith in- it's incredibly deep contemplative stuff. Not just the best film of 2013- The Fake easily deserves consideration as one of the best films of all time.

Moviees available on DVD and Blu-ray from YESASIA and Amazon