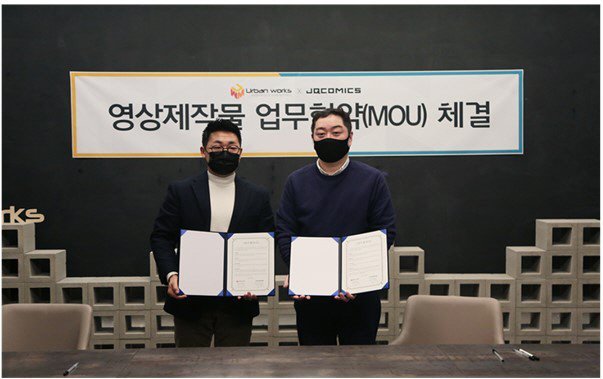 On March 18th the drama film production company Urbanworks announced that they had entered a new partnership with the webtoon company JQ Comics. The memorandum of understanding between the two promises that JQ Comics will provide intellectual property in the form of the webtoons it publishes to serve as material for screen adaptations. The news comes as titles like "Semantic Error" and "Business Proposal" are showing massive synergy with webtoon-to-screen projects.

JQ Comics is the production company responsible for such titles as "Fist of Legend" and "A Gentleman's Dignity" though neither of these titles are recent. Currently running titles for JQ Comics that seem likely candidates for dramatic adaptations are The Predator and Namjoo Search. The Predator is being distributed in five markets outside of South Korea- China, Indonesia, Japan, Taiwan, and the United States. Namjoo Search is new, but has been a quick hit in webtoon circles.

Urbanworks tends to be better known for their work producing variety shows than scripted content. "Bad Guys" and "Black Dog" are probably their best known television dramas. The memorandum of understanding between the two companies suggests greater ambitions in the worldwide market, as they explore new possibilities for expansion.