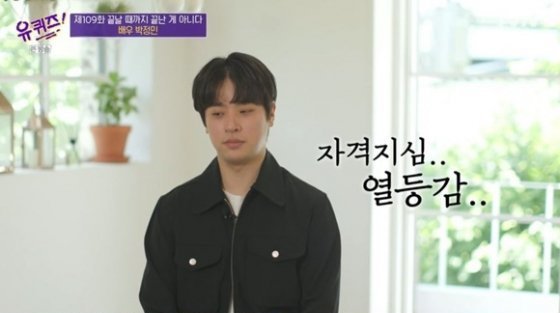 On June 2nd the television chat program You Quiz on the Block featured Park Jung-min, in a moment where he spoke about his career. Despite being a well-known name today, Park Jung-min discussed some surprising dark spots in his career. He mentioned having terrible grades in school, and even failing to understand what a self-introduction was when he matriculated to an arts college. But perhaps the biggest shock is how he nearly quit acting seven years ago.

Park Jung-min had a very strong debut with the critically acclaimed "Bleak Night" back in 2010. But he claimed to have trouble breaking into mainstream acting, with a wide variety of smaller roles in obscure projects. Park Jung-min said that he had actually gone so far as to make arrangements to recover his deposit money and try to make a new start studying abroad. But these plans changed when Park Jung-min was told that director Lee Joon-ik wanted him for his new movie.

In "DongJu, The Portrait of A Poet" Park Jung-min plays a famed Korean writer of the Japanese Occupation Era. The youthful ambivalence which he showed in "Bleak Night" and even in his personal life proved a fantastic fit for the role, which marked a turning point in his career. He went on to play a wider variety of roles though, with a big one being his turn as a transwoman in the moody assassination film "Deliver Us From Evil" from last year.

Of the many anticipated projects from Park Jung-min, his role as the production director for the cult at the center of "Hellbound" is likely the biggest one. Already credited as a lead, Park Jung-min could even eclipse Yoo Ah-in in importance for the supernatural thriller depending on how the story is adapted. Other upcoming projects for the busy actor include "Unframed", "One Win", and "Smugglers", which like "Hellbound" do not yet have confirmed release windows.