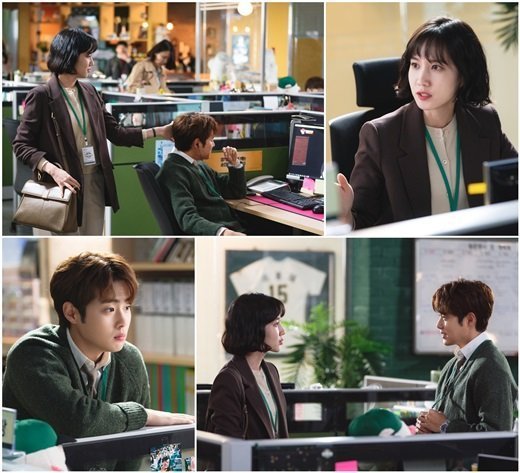 As "Stove League" nears its premiere on December 13th more elements of the drama are coming into focus. Most notably, though the drama is focused around a baseball team, increasingly the story appears to be focused more around office management of a baseball team, than it is around baseball games directly.

Specifically, Park Eun-bin has been granted second billing in the drama as the operations manager. Jo Byeong-gyu also has a prominent role as the current only credited employee in that department. As Park Eun-bin is a woman and Jo Byeong-gyu is a man, their positions in regard to subordinate and superordinate are unusual, even though Park Eun-bin appears to be playing the role in the stereotypically physically and verbally aggressive manner normally reserved for older men.

On set reports have described Park Eun-bin as being very in-synch with Jo Byeong-gyu, who is portraying a less than clever man who arrived at his position through family patronage. Purportedly Park Eun-bin's character will mold him into being a properly contributing member of the team.

While none of the promotional material in "Stove League" has suggested a romantic subplot, Jo Byeong-gyu would be the most obvious choice, as he is only four years younger than Park Eun-bin. The higher-billed Namgoong Min and Oh Jung-se, by contrast, are fourteen and fifteen years older than her. "Stove League" will air on Fridays and Saturdays on SBS in the timeslot previously occupied by "Vagabond".