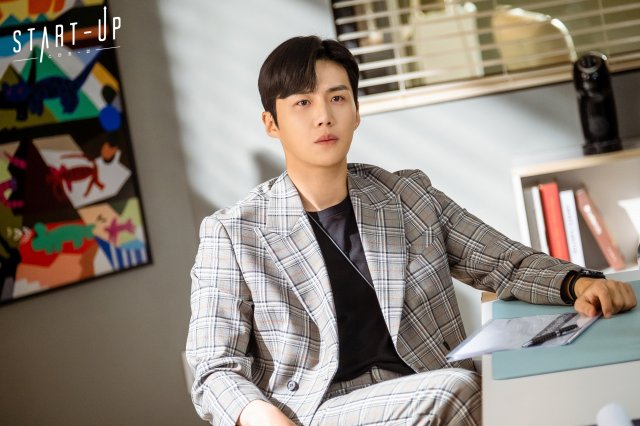 "Start Up" has been surprisingly good for Kim Seon-ho's image. When his role as second lead in the drama was first announced, it was widely seen as a downgrade, and perhaps an unavoidable one. His last drama, "Catch the Ghost" ended with ratings of 2.6% down from a premiere episode of 4.1%. While the performance was not terrible, it also did not do much to inspire confidence in Kim Seon-ho as a leading man.

But he has shown surprising synergy in "Start Up" while surprisingly not upstaging either of the actual lead actors, Bae Suzy and Nam Joo-hyuk. Kim Seon-ho has instead shown himself to be a surprisingly credible rival for Nam Joo-hyuk, and their battle of wills has dominated "Start Up" to an extent greater than the plot. "Start Up" has been noteworthy for having a strong presence on social media despite relatively week television ratings hovering in the 5% range.

A big part of this has centered around how Kim Seon-ho's character has the most dynamic story and character arc. Where Bae Suzy and Nam Joo-hyuk's characters are motivated by conventional success, Kim Seon-ho has more trouble dealing with his innately cold personality. Raised as an orphan, the prospect of success in the start up business satisfies a deeper yearning for Kim Seon-ho's character, making his victories seem more meaningful even when they're also more minor.

Kim Seon-ho himself deserves much of the credit though, simply for being fantastically cast. He had a late start as an screen actor, debuting only in his thirties, and his career has had definite ups and downs. This has allowed him to fully inhabit his character, making it as easy to root for the fictional man he portrays as it is for the real Kim Seon-ho. Already Kim Seon-ho has started practicing for his next project, a stage play, even as international fans eagerly await his next televised project.