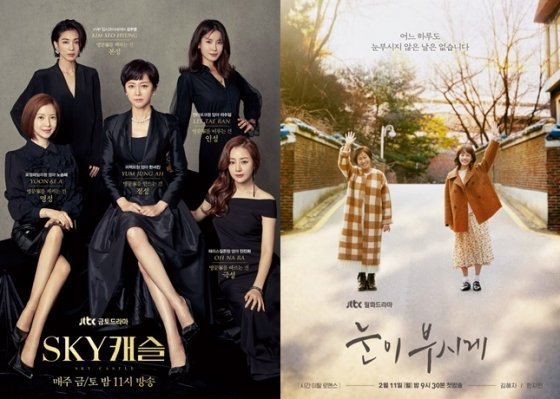 JTBC was fortunate to start off 2019 with a major success. "SKY Castle", a drama about mothers trying to get their children into top universities, started with a meager 1.7% rating only to exceed 20% in later episodes. The drama quickly became a cultural touchpoint, and firmly established cable networks as equal competitors to their broadcast counterparts.

Less dramatic, but still impressive success was managed with "The Light in Your Eyes", which ran the gamut from 3.2% to 9.7%. The drama's unique fantasy romance concept of using dementia to blend old with new struck a chord with viewers, and earned strong praise from the usually broadcast centered drama awards season.

But since then jTBC's output has had mixed results. "Legal High" did not redefine the legal drama at its relatively weak 3.3% point. The sequel series "Welcome to Waikiki 2" only did marginally better than its predecessor at 2.1%, and stuck out sorely in light of jTBC's increased expectations. While the socially conscious school violence themed drama "Beautiful World" did well at 5.8%, even these were not the superstar numbers of earlier this year.

The politically themed "Chief of Staff" has started off modestly in the 4% range. Whether the ambitious project will live up to expectations remains to be seen. Meanwhile, Kim Ha-neul's melodrama "The Wind Blows" has quickly moved from a 3% start to a 5% current range, another likely modest success with potential yet for more.