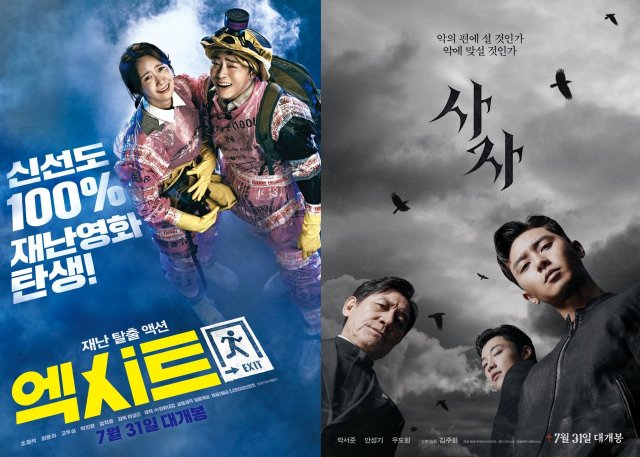 It's highly unusual for two major releases to open on the same day in South Korea. It's bad business, as most people will just end up choosing one or the other. Yet that's exactly the current situation with "Exit - Movie" and "The Divine Fury", which elected against each other this weekend, rather than "The King's Letters" and "The Battle: Road to Victory" on either side of the high summer season.

The last time this happened was in 2013 when both "Snowpiercer" and "The Terror Live" opened on August 1st. Interestingly enough, that particular moment does not necessarily advise against the concept. "Snowpiercer" made over nine million admissions and "The Terror Live" over five million. It's difficult to argue that either film would have done significantly better had they been released with more of a widely spaced gap.

And indeed, going by the early box office receipts "Exit - Movie" and "The Divine Fury" are both benefiting from being distinct genre films in a movie marketplace that has been dominated by Disney remakes and sequels. It's been some time since there was a comic disaster movie or a supernatural action film on this kind of a high budget scale.

Whether either movie will have serious staying power is difficult to say. Both will be competing with "The Battle: Road to Victory" next week. That war epic, in addition to being yet another very different drama from the previous three major releases of the summer, is coming at a very culturally charged moment thanks to the ongoing anti-Japan boycott.