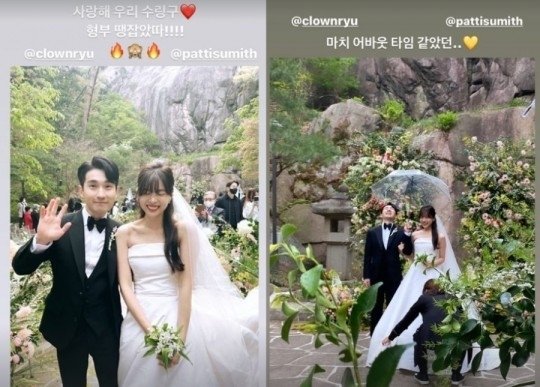 On April 17th, actor Ryu Deok-hwan married a model and fashion brand CEO. Ryu Deok-hwan is best known for his role as the lead in the "God's Quiz" series of criminal investigation dramas. While reasonably well-known, Ryu Deok-hwan is not the sort of celebrity whose nuptials warrant major attention. So it is that Ryu Deok-hwan's wedding only became major news in the days to come, as stars in attendance at the wedding made Instagram posts regarding the event.

Lee Sun-bin was the foremost in calling attention to the ceremony. Ironically, she appears to a friend of the bride more than the groom. The Instagram Story post in question contained both photos and video of the happy couple at the secluded mountain location of their wedding. Originally the two had been set to be married last October but had to delay the ceremony due to COVID-19. Many people can be seen in the background, though they are all wearing masks.

Elsewhere Ryu Seung-ryong made a joke post on his own Instagram Story account about how happy he was to see daughter, son and enemy at the wedding. But as the pictures demonstrate, these are just actors who he has appeared with in other movies in such a capacity. Specifically, Park Shin-hye as his daughter in "Miracle in Cell No. 7", Go Kyung-po as his son in "Seven Years of Night", and Shin Ha-kyun as his antagonist from "Extreme Job".

Kim Jae-wook was also in attendance, and posted a congratulatory note on his own Instagram account. While Ryu Deok-hwan has no confirmed upcoming projects, the hullaballoo surrounding his wedding shows that he still has many friends in the South Korean entertainment industry. He last directed one of the shorts in the omnibus "Like That Again Today" from last year.