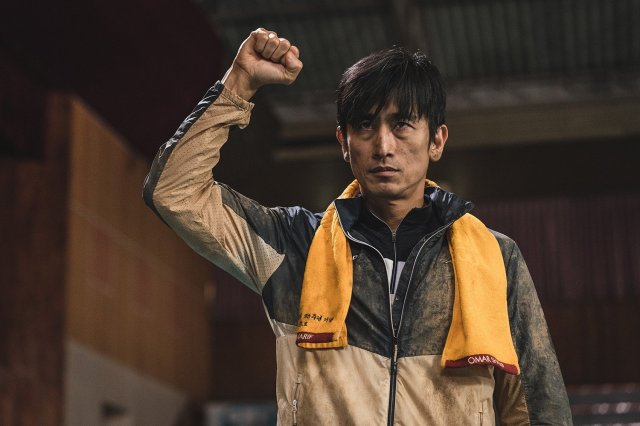 Some of you might not remember Cha In-pyo. Well, most of you probably. As "What Happened to Mr. Cha?" quickly makes clear, Cha In-pyo was a big star in the nineties, and is consequently well-remembered by a certain age group. But in the modern day, working with a new generation of advertisers and producers, Cha In-pyo struggles for relevance despite the fact that he has still maintained a fairly fabulous physique into his fifties. Then he gets buried in an insurance scam.

The coyness with which Netflix has marketed "What Happened to Mr. Cha?" is remarkable, given that I'm still mad about their spoiling the big plot twist in "The Call" for no reason. And I rather enjoyed how "What Happened to Mr. Cha?" rambles around pointlessly for quite some time, with Cha In-pyo getting into petty arguments with managers and fans alike regarding his career. A scene involving the unseen Shin Ae-ra is also great, serving as a reminder that as weird as it must feel for a celebrity to be recognized by strangers, it's even weirder for people to remember your wife.

This farce is only magnified when the actual plot finally comes crashing down on Cha In-pyo's head, forcing the man to weigh his professional vanity in a literal life-or-death situation. I like how despite the inherent absurdity of the situation Cha In-pyo's concerns are still treated as reasonable. This is a man who quite sincerely discusses himself in the same context as Song Kang-ho and Lee Byung-hun. Even for a celebrity certain kinds of exposure represent abject humiliation.

You may have noticed I'm using lots of flowery, obfuscatory language in this review which hints at a convoluted explanation you may or may not be able to guess at given what limited information you have about the movie. Well, "What Happened to Mr. Cha?" engages a lot in the same kind of misdirection. As the plot devolves into ever more ludicrous logical puzzles, Cha In-pyo is forced to resort to increasingly goofy schemes to get out of the mess, many of which succeed in only laterally helpful ways.

Despite quite literally being a Cha In-pyo vehicle, "What Happened to Mr. Cha?" is chiefly elevated by the supporting performers, all of whom are appropriately self-centered and either oblivious to Cha In-pyo's central position in the plot or viewing it as only a secondary concern. Even Cha In-pyo's fans exude this energy, eventually managing to so greatly inconvenience the man that he ends up at exactly the wrong place at exactly the wrong time.

It's hard not to see the celebrity metaphor there. After all, that's how anyone gets a career in show business is as much through luck as through talent. Despite Cha In-pyo playing himself as fundamentally narcissistic, he's still a pretty charming guy and writ large the movie comes off as a convincing display of humility. I doubt "What Happened to Mr. Cha?" will launch the actor into renewed stardom compared to his more famous peers but at the very least Cha In-pyo has convinced me he has a better sense of humor than those guys.