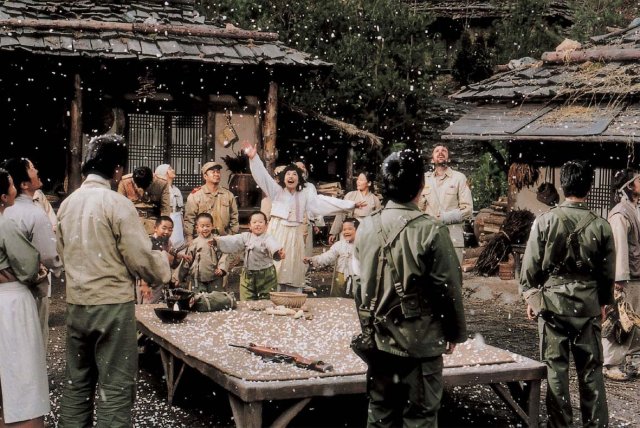 I was a unnerved by how the opening scene of "Welcome to Dongmakgol" went out of its way to make certain North Koreans look pettily evil. But over time, I had to withdraw this impression as certain Americans in this Korean War era historical film are less pettily evil, but still commit evil acts all the same. Therein lies the fundamental absurdity that defines the film. The characters in "Welcome to Dongmakgol" all want to do evil, yet often have to be talked into it.

Nowhere is this absurdity made more obvious than via the obscure hamlet where most of the action takes place. Dongmakgol is an isolated village in the middle of nowhere. It's unclear whether Dongmakgol just isn't on the map or if all three of the armies depicted in the movie are so horribly lost that they have no idea where they are. Alternate farcical explanations are another recurring plot point in the movie, with neither one having any ultimate bearing in the relevant immediate reality.

Take the massive standoff that takes place when our opposing protagonists finally meet each other. Each side asks the same questions. Have they come looking for a fight? Are they lost? It does not occur to either side to ask whether their useless weapons are of any use in a situation like this. Indeed, with all the soldiers having horribly burnt out reasons for arriving at Dongmakgol in the first place, it takes quite some time for them to realize they're all in the same situation.

"Welcome to Dongmakgol" isn't really an anti-war movie. Ultimately the war itself is left unaddressed, as the characters instead decide to take advantage of their various peculiar situations allowing them to have a badly needed vacation. Dongmakgol itself is indifferent to their plight, although certainly curious. There's an adorable, earnest incompetence at the attempts of the villagers to communicate using an archaic English phrase book. How they even came across that artifact, who can say?

In general we don't learn much about the villagers, their lives feeling idyllic just because they're so normal. Yeo-il (played by Kang Hye-jung) is almost an exception to the rule but we never really learn much about the resident village idiot. Kang Hye-jung's performance is just of such a sublime quality she's almost attractive enough to qualify as a love interest. Yeo-il, and by extension Dongmakgol itself, represent a simpler era, one bereft of the nonsensical ethical dilemmas posed by war.

So it is that the movie's soldiers go from questioning their honor to once again finding value in themselves by human beings. They bask in the beauty of the cinematography and accept that their lives must come to an end, finding comfort in the fact that unlike all too many in war, at least their deaths had a purpose. "Welcome to Dongmakgol" is loaded with that kind of magical, and at times even corny quality. But much like the soldiers themselves, I still found myself believing in these platitudes by the end for all my earned cynicism.