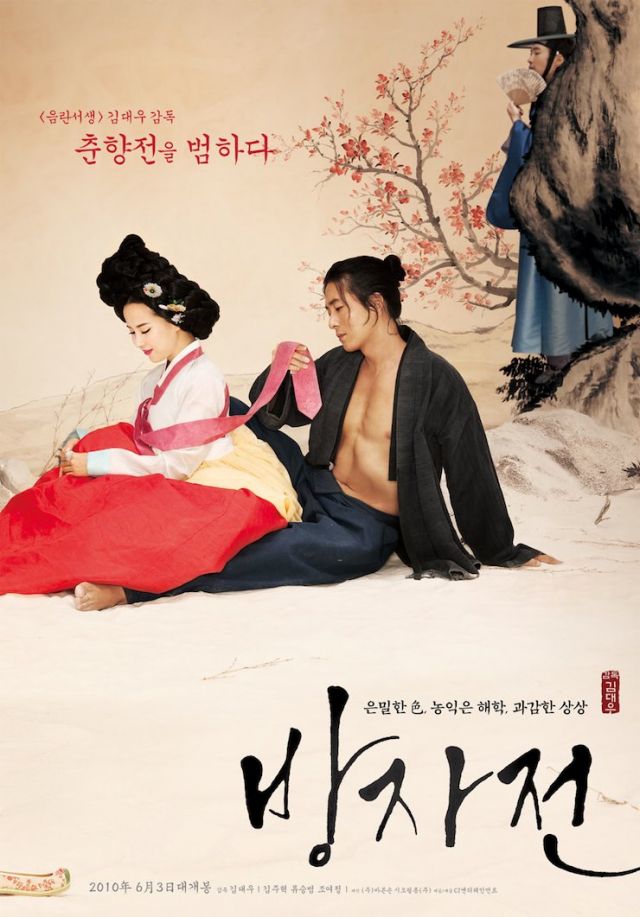 "The Servant" (2011, Kim Dae-woo) is a modern take on the Korean pansori folktale of Chunhyangjeon, a story about star-crossed lovers and how circumstances and predispositions hinder love. "The Servant" presents an erotic-drama that is charged with passion as we explore this classic tale from the perspective of the simple and passionate servant.

The film begins with Bang-ja (Kim Joo-hyuk) retelling his story of love and tragedy to an accomplished writer. Bang-ja is called a gangster by the novelist, a title that he doesn't object to. Our initial meeting with Bang-ja sparks immediate intrigue as this phlegmatic character begins to re-tell his enduring tale of love, loss and commitment.

Having travelled around for most of his 20s, Bang-ja begins his story as the newly appointed personal servant of Lee Mong-ryong (Ryoo Seung-bum), an aristocratic scholar on the path to becoming a high-ranking state inspector. He is asked to arrange a meeting with the beautiful Choon-hyang (Cho Yeo-jeong ), a kisaeng's daughter, whose mother has high hopes for her to improve her social standing through marriage. Both men are captivated by her beauty and begin efforts to posses her. Mong-ryong openly makes his advances known and, with great expectation, begins his courtship with her. Bang-ja, being of significantly lower status, heeds the advice of Elder Ma (Oh Dal-soo), a freeloading house guest, in pursuing his dream of being Choon-hyang's one and only.

Bang-ja sneaks into Choon-hyang's bedroom late one night to express his love for her. After some physical resistance, Choon-hyang submits to his passions knowing that they are engaging in a taboo and potentially dangerous act. Choon-hyang acknowledges her feelings for Bang-ja but makes him sign a contract stating that, despite their love, he will assist her in marrying his noble master.

Mong-ryong discovers the affair, but rather than expose the two, he saves face by moving to Seoul to continue with his own ambitions. Meanwhile, Bang-ja finds himself in a new household as a servant continuing his passionate affair with Choon-hyang. He struggles to act according to his station when Choon-hyang is mistreated and they eventually find themselves at the mercy of the newly appointed state inspector.

Even though the film's enchantment dips halfway through (as the characters' roles are recontextualised), it picks up just in time as events unfold for its tragic yet heart-warming conclusion. Watching "The Servant" was a visual delight. The film's presentation was absorbing as scenes were meaningfully layered to complement the retrospection of Bang-ja's emotional zealousness and commitment to love.

Agree, disagree? Please feel free to comment on this review. Discussions are welcomed.