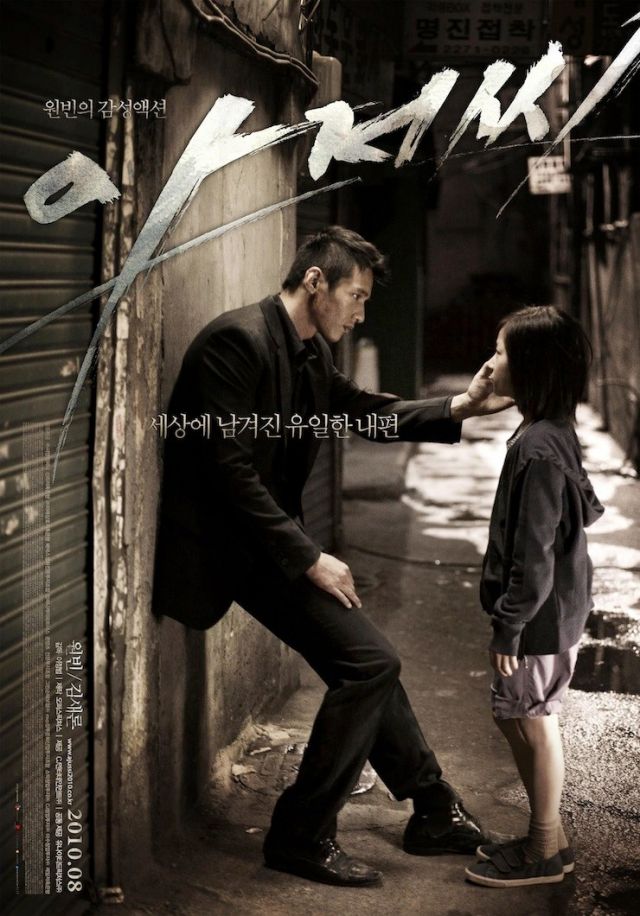 Having been nominated for and winning numerous awards, "The Man From Nowhere" (2010, directed by Lee Jeong-beom) is definitely one to see, but not for the reasons you might think. This dark action flick seduces you with its delivery of gritty violence and dynamic action scenes, but at its core this is a story of identity, the meaning in one's life and rekindling the passion for that which we hold dear.

Ex-special agent Cha Tae-sik (played by Won Bin) is a broken man with nothing to lose. Having witnessed his wife and unborn child being killed, he now finds himself aloof and alone trudging through his new life as a lonely pawnshop owner. He has no meaningful connections with anybody, dark memories of a good life gone by, and no prospects or desire to pull himself out of the aftermath - this is a man with nothing to lose and everything to gain.

Enter So-min (Kim Sae-ron), an equally lonely young girl desperately seeking out her own sense of worth as she is rendered homeless, loveless and emotionally abandoned by her drug addicted mother. Having no male role models in her life outside her mother's abusive and violent companion, she seeks to take refuge from her bleak childhood reality in the company of this small pawnshop owner.

Having been initially rejected by Tae-sik, So-min delivers a shock to Tae-sik's otherwise unemotional existence by reigniting the passion and love he once directed towards his wife and unborn child. Tae-sik is a man unknowingly in need of what this young girl is asking of him. His tainted violent history and her innocence and tragic presence make a compelling premise for a story about transcendence and hope.

So-min's mother makes a critical mistake as she attempts to steal heroin from one of her employers. This does not go down well as she is soon identified as the culprit. So-min and her tortured mother are taken away to be held accountable for her misconduct. The result is a mutilated, organ-robbed woman in the back of Tae-sik's car and a young girl now trapped in the attic of a sadistic old woman.

The film then follows Tae-sik as he revengefully seeks to liberate So-min from her mother's murderous kidnappers. Having inadvertently been placed in the middle of a drug war between rival factions, Tae-sik makes use of his deadly training and newly found passion as he attempts to seek revenge on the world that caused him to lose all that he held dear, while saving the young girl who reopened his eyes to new possibilities.

Yes, this is an action movie, and of course there is plenty of bloodshed and well-choreographed action sequences. This, however, is not what stuck with me after the credits had passed. Besides the fact that the majority of fight scenes were entertaining, they do pull you out of the experience at times with the odd drawn-out fight scenes, kitsch sound effects, and cliché action sequences. This, however, did not stop me from investing myself in Tae-sik's journey for hope and his relationship with the young girl who started it all. This is what really makes this film memorable and although his character manages to redefine himself as he undergoes his quest, by the end we are left with more a cathartic message of hope rather than a completely transformed hero.

Tae-sik's journey contains very dark subject matter - child abuse, drug addiction, human trafficking, murder, child extortion, organ trafficking, and gangsterism. This is a world where society has slipped into a depressing trough, ruled by self-empowered gangsters. This dark content works to paint a dystopia in which patriarchy has failed society, a world in which the man from nowhere has lost all sense of who he is and what his life was like before he lost it all. He is not from here; he only now finds himself in this world and must fight to re-anchor himself within it.

Agree? Dissagree? Please feel free to comment on this review. Discussions are welcomed!