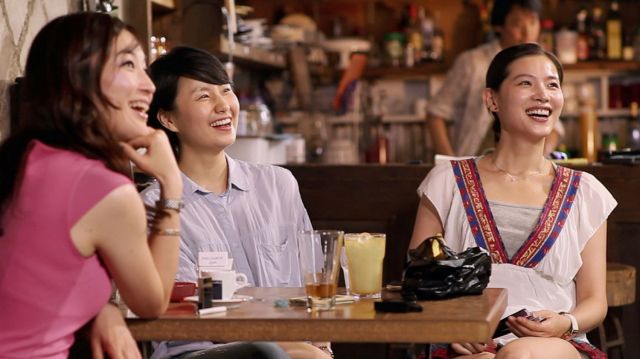 The entirity of "See, Beethoven" takes place in a coffee shop. I just need to get that warning out of the way because it's important to emphasize- this movie is about three women talking in a coffee shop, and for the most part that's all we ever see, save for occasional interruption. This is an exciting world where people do exciting things. We just don't actually get to see them because the movie's perspective character is a man who does not actually know any of the three women having the lively conversation.

So, what do they talk about? Girl stuff, mostly. Well, that was my initial impression anyway, but as the film wore on I began to realize that the tenor of the conversation had a specific, darker bend than that- these women are gossiping. Gossiping is bad. It is a thing we are not supposed to do. And yet, I think the three women understand this rule as well. The justification for why they're talking like this pretty much boils down to the fact that they're discussing people and places they'll never see again, so what's there to be embarassed about?

I have to admit this subtle argument is a persuasive one. For most of the movie I admired the free spirit of the conversation, the open joyful way these women talk, having not seen each other in so long yet having so much to check up on. After awhile this does get to be tiring. There's only so much entertainment to be gleaned out of eavesdropping on the conversation of three strangers.

And that's a bit of a guilty realization, really. To admit that the conversation is trite, boring, and bad, not because they're talking about different stuff, but because it's gotten repetitive. "See, Beethoven" provides an effective, if disquieting argument for why gossiping is such a popular pasttime even for all the negative trappings. For awhile it's fun, and done in the right way it's pretty much a victimless crime.

Victimless crime. Now there's a fun phrase. It negates all sorts of potential responsibilities. And that's where, ironically enough, "See, Beethoven" is able to make gossiping seem so unpleasant when so much of the runtime glamorizes the practice. People are hurt by mean-spirited behavior even when it's not intended to be harmful. There's this sinking realization that the emptiness of the gossip reflects an emptiness in the actual lives of the three women- one temporarily stymied by the ambience of the coffee shop, but which, inevitably, cannot be sustained.

It's to the credit of "See, Beethoven" that this elusive sense is maintained for so long. A reunion with old friends, nice music, cool drinks on a hot day, and colorful guests, can do a lot to keep things fun. But here's the thing- while it's easy enough to laugh with the three leading ladies, sometimes even laugh at them, I never got the sense that I would like them much as people. Even if they're having fun for themselves, these three women are in some sense performing. That's the price of a happy social life, but touch a real nerve, and even that's not enough.